JONESBORO — Suspended Clayton County Sheriff Victor Hill and several sheriff’s deputies are facing a lawsuit for the alleged beatings and “life-altering brain damage” suffered by an inmate housed at the Clayton County jail.

In February, Arries was arrested for disorderly conduct, a misdemeanor charge, at Hartsfield-Jackson airport and transported to the Clayton County jail.

Upon arrival, a nurse at the jail informed deputies that Arries suffered from bipolar and a mood disorder.

The suit states a nurse and two deputies observed his “thoughts to be disorganized and that he was unaware he was in the state of Georgia. In that state of mind, Gabriel was allegedly combative and shouting racial epithets at the sheriff’s deputies.”

Arries was then placed in a restraint chair outside of the jail’s infirmary. After four hours in the chair, the suit states that Aries was again beaten and forced back into the restraint chair.

Sometime later, he was placed on suicide watch and housed in a cell with seven violent inmates that led to an alleged fight with another inmate. The suit claims deputies tased Arries causing him to defecate on himself.

Arries was moved to a medical holding cell with “20 open wounds on his face while covered in feces.”

He was transported to Atlanta Medical Center where he was diagnosed with a “severe traumatic brain injury, subdural hematoma, subarachnoid hemorrhage and closed fracture of nasal bone.”

The suit claims Hill was negligent in his supervision of deputies and “developed a pattern, policy and custom of unreasonably placing detainees in the restraint chair and permitting the unreasonable and malicious excessive use of force by his deputies.”

In April, Hill was indicted on federal charges of of violating the civil rights of four jail detainees for the use of the restraint chair.

A second lawsuit was filed in July by Mitavion Williams claiming he had been placed in a restraint chair for more than four hours with his hands cuffed behind his back.

The current suit alleges the beatings, indifference to Arries’ medical needs and failure to obtain timely medical care resulted in a “life-altering brain damage” additional personal injuries, physical and emotional pain and “significant medical expenses which he continues to accrue.”

The suit is asking for attorneys’ fees, costs of litigation and compensatory, general and punitive damages.

JONESBORO — Clayton County residents will have to pay more than $300,000 annually to fund the salary of an interim sheriff as well as paying t…

ATLANTA — Gov. Brian Kemp has appointed a three-person panel to make a recommendation as to whether Clayton County Sheriff Victor Hill should …

The Girl Scouts Troop 15052 on display in Jonesboro during the 2020 Scarecrow Contest.

The contest is open to all families, businesses, clubs and organizations in Clayton County.

City officials are encouraging creativity and imagination suggesting the depiction of your favorite fairytale, animal, fantasy figure, movie or television character or historical person. No political, religious, off-color or profane displays will be allowed.

Entry forms are due by Oct. 1. Installation must be erected by Oct. 11 and remain until Nov. 12. All scarecrows must be removed by Nov. 15. 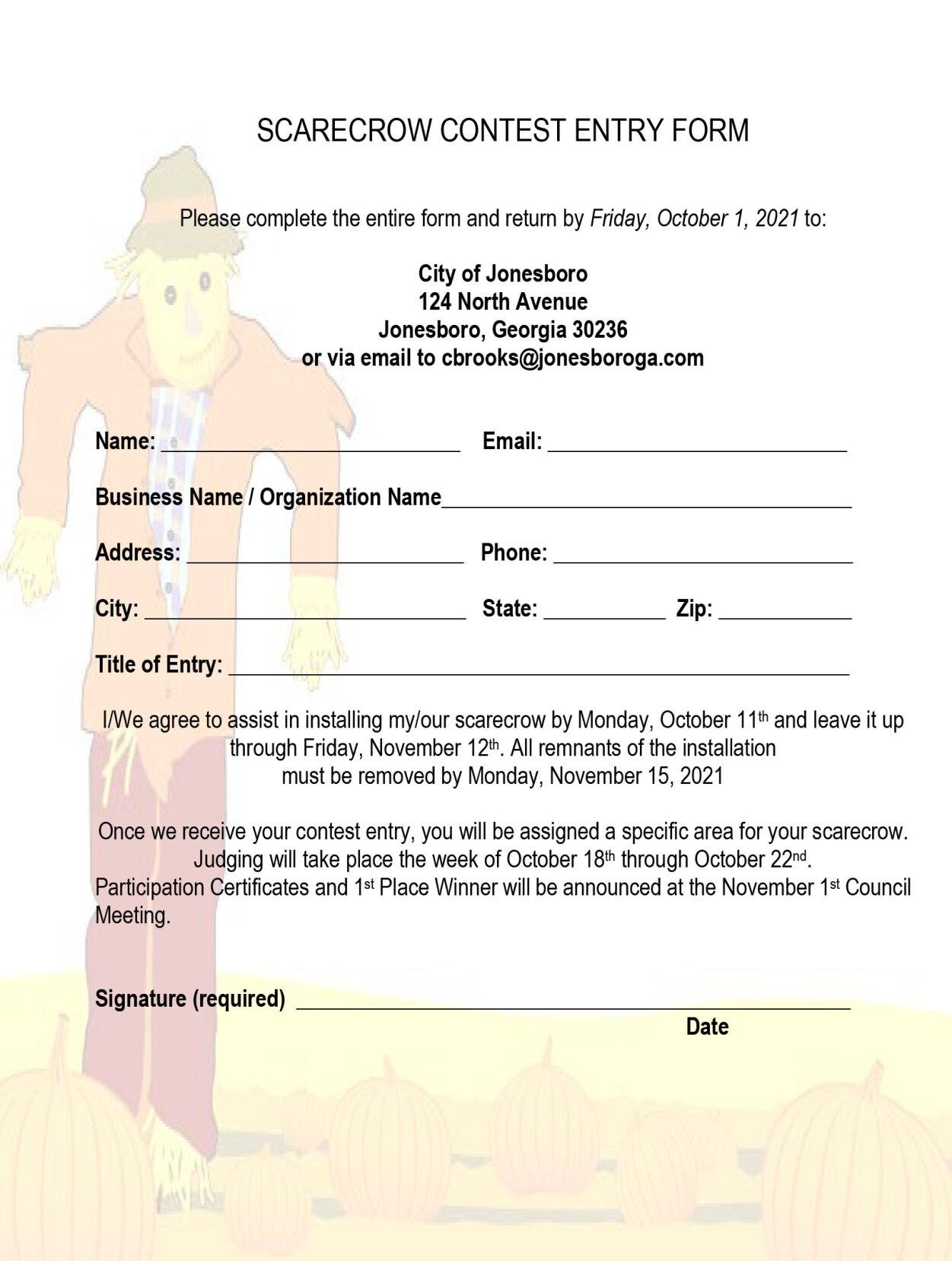 Installations will be placed in the plant beds along Main Street and must be no larger than 8 feet in height and 4 feet in width. They should be build to withstand wind and rain and able to stand.

Judging will take place between Oct. 18-22 and a winner will be announced at the Nov. 1 City Council meeting. The first place winner will receive a $100 gift card, and participation certificates will be awarded.

For more information or to obtain a contest entry form, visit www.jonesboroga.com.

“Convicted felons are prohibited from legally possessing and purchasing firearms under any circumstance,” said Acting U.S. Attorney Kurt R. Erskine. “Criminals who try to circumvent these restrictions by stealing and using the identities of law-abiding citizens will be prosecuted.”

According Erskine, the charges, and other information presented in court: Williams, 39, allegedly used a fraudulently obtained identification card bearing his photograph, but the name and date of birth of another person, to purchase dozens of firearms and large-capacity ammunition magazines in the metro Atlanta and North Georgia areas. Williams could not lawfully purchase the guns because he had been convicted previously of numerous felonies, including burglary, robbery, terroristic threats, kidnapping, aggravated battery, and criminal use of personal identification information.

In July, police officers recovered a second semiautomatic pistol from the scene of a shooting in Tallahassee, Florida. Federal agents traced this firearm to a Georgia purchase made with Williams’s identification card. A cellular telephone video taken around the time of the Florida shooting depicted the alleged shooter as a man of Williams’s race and complexion wearing a distinctive red baseball cap and red Gucci belt.

On July 20, federal agents searched a Jonesboro residence where Williams rented a room. In one of the bedrooms, agents recovered four firearms that had been purchased with Williams’s fake ID, empty firearm boxes for other firearms purchased with that ID, a red baseball cap, and a red Gucci belt. Williams was arrested that same day.

Williams, of Jonesboro and Tallahassee, Fla., was arraigned before U.S. Magistrate Judge John K. Larkins III. He was indicted by a federal grand jury on Aug. 17. He was arraigned Aug. 26. Members of the public are reminded that the indictment only contains charges. The defendant is presumed innocent of the charges and it will be the government’s burden to prove the defendant’s guilt beyond a reasonable doubt at trial.

This case is being investigated by the Atlanta, Georgia, and Newark, New Jersey, Field Divisions of the Bureau of Alcohol, Tobacco, Firearms and Explosives.

The Board of Education unanimously approved a COVID-19 vaccination incentive program awarding bonuses to employees who are fully immunized by Sept. 30.

JONESBORO — The Board of Education unanimously approved a COVID-19 vaccination incentive program awarding bonuses to employees who are fully immunized by Sept. 30.

A one-time $500 supplement will awarded to full-time employees and $250 to all part-time district employees.

Superintendent Dr. Morcease Beasley noted that bus drivers are considered full time and substitute teachers who have worked for at least 20 days from the start of the school year through Sept. 30 will be eligible part-time employees.

The total program cost is expected to be $4.2 million and paid for using CARES Act funding.

According to the executive summary presented to the BOE, the supplement “seems fitting and appropriate to provide an incentive to encourage all employees to get the vaccination.”

The item was initially discussed in executive session during the board’s Aug. 2 meeting and approved. No further public discussion was had during the Aug. 30 meeting.

Click and hold your mouse button on the page to select the area you wish to save or print. You can click and drag the clipping box to move it or click and drag in the bottom right corner to resize it. When you're happy with your selection, click the checkmark icon next to the clipping area to continue.