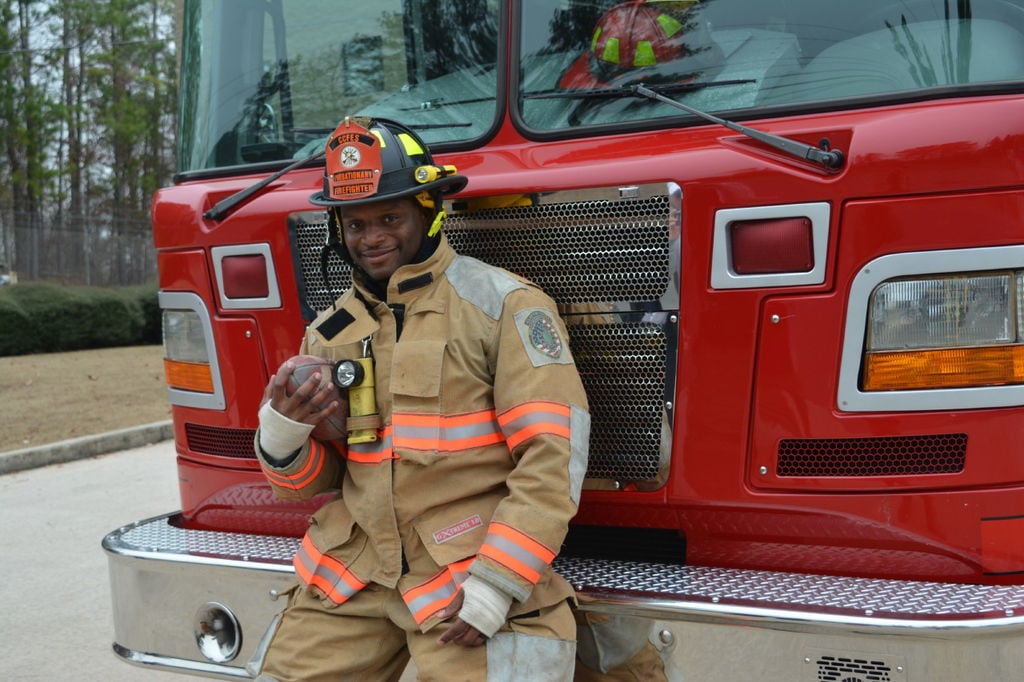 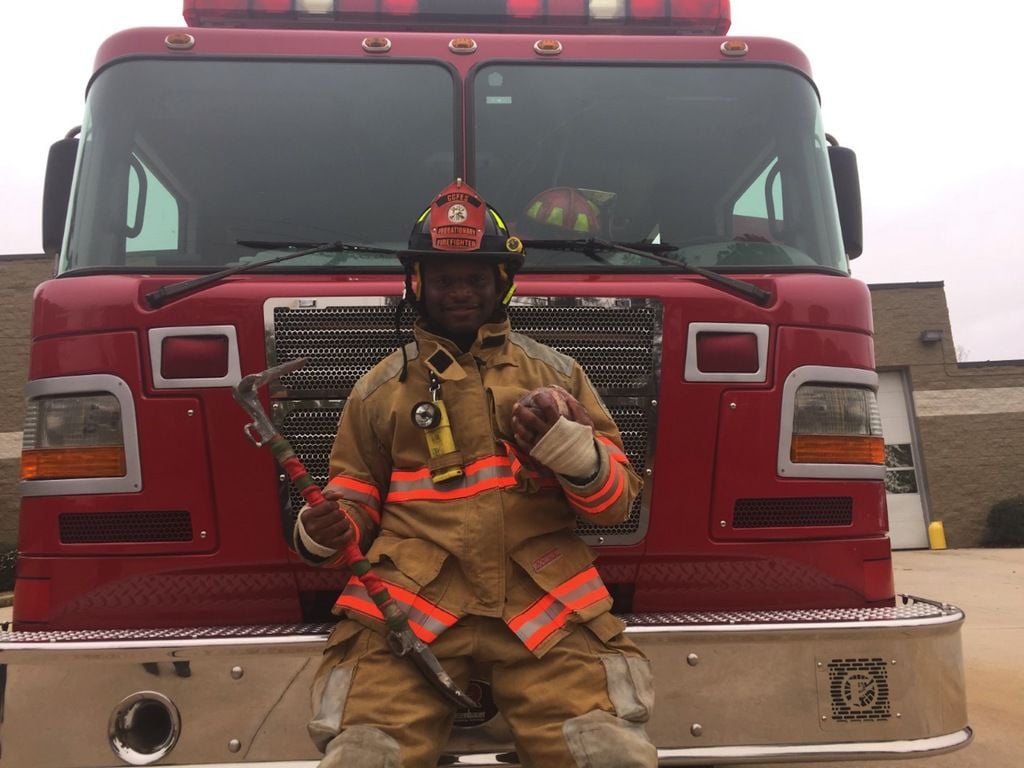 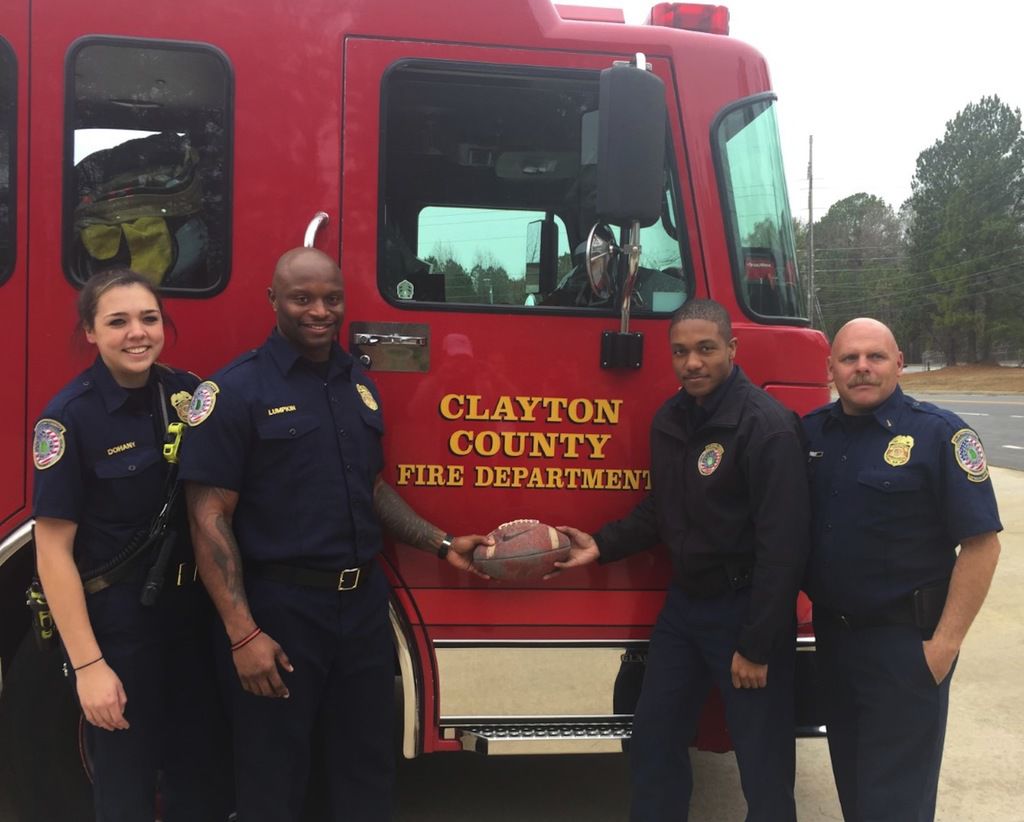 Former University of Georgia and NFL running back Kregg Lumpkin, center-left, said a big reason why he wanted to be a firefighter is the sense of brotherhood that comes with the job. (Staff Photo: Luke Strickland) 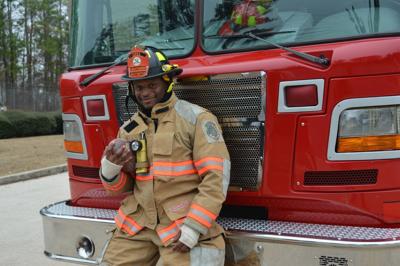 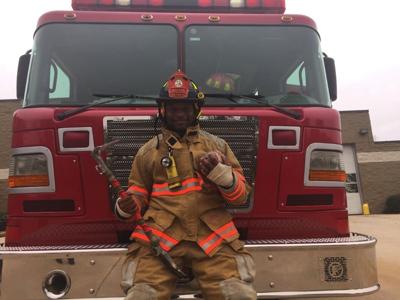 Former University of Georgia and NFL running back Kregg Lumpkin, center-left, said a big reason why he wanted to be a firefighter is the sense of brotherhood that comes with the job. (Staff Photo: Luke Strickland)

RIVERDALE — Those familiar with college football and the Southeastern Conference in particular will remember the name Kregg Lumpkin, who played at the University of Georgia in the mid-2000’s, and later in the National Football League.

For those living in Clayton County, Lumpkin goes by a new title — Firefighter Lumpkin of the Clayton County Fire and Emergency Services Department.

In November, Lumpkin graduated in a recruit class of 14 firefighters. Lumpkin and his fellow recruits went through 12 weeks of training, including 42 chapters and 49 tests totalling more than 450 hours of training. Lumpkin earned “top rung” in the class, meaning he produced the best overall academic score, physical score and attitude.

During that time, Lumpkin realized that being a firefighter requires extreme attention to detail.

“The amount of detail you have to know and continue to know, I’m constantly learning every day, just trying to make sure that not only you stay safe but you’re helping your family stay safe and protecting the Clayton County Fire Department brand,” he said.

Lumpkin was a star running back at Stephenson High in DeKalb County where he rushed for more than 2,000 yards as a junior and 1,400 yards as a senior. He played in 11 games as a freshman at Georgia, finishing second on the team in rushing with 433 yards. A knee injury forced him to miss entire sophomore season, but he returned for his junior season and entered the NFL as an undrafted free agent.

After stints with the Green Bay Packers, Seattle Seahawks, Tampa Bay Buccanneers and New York Giants, Lumpkin left the league after the 2012 season. Keen to find a new career, Lumpkin worked as a leasing consultant and as a paraprofessional in the DeKalb County School System before applying for a job with CCFES.

Besides the fact that former UGA teammate and fellow firefighter Michael Cooper and his sister-in-law worked at CCFES, Lumpkin said he believed he would fit in due to his desire to be a part of a team.

“Coming in, my thought process of being a firefighter simulated on a lower level as far as playing football,” he said. “It’s a brotherhood. You come in with your brothers, you work out together with your brothers, you go to recruit school. You’re in a family environment which is close-knit, you’re going to look out for your family as well as in the NFL. I really enjoy that and I liked that about it.”

Lumpkin entered recruit training physically fit from his football days, but still was surprised at how difficult some of the unusual physical activity was.

“It was on a different level dealing with hoses and learning how to catch hydrants and pulling hoses and going up ladders,” said Lumpkin. “Just different aspects of being a firefighter. The physical part was challenging, I’m not always in good shape. But through those 12 weeks I did learn a lot about myself and being physically fit to be able to do the job.”

Clayton County Fire Chief Landy Merkison said most former athletes he’s worked with over the years always seem to be challenged by the physical activity associated with being a firefighter.

“A lot of people don’t understand the physical nature and the physical requirements it takes for all of our employees,” said Merkison. “While they’re not athletes in the true sense of the word, really they are. When you look at the amount of stress they put their bodies under, the gear they are required to wear.”

Lumpkin passed the test of recruit school with flying colors, but the real challenge of being a firefighter still awaits. He still needs to pass tests to become a paramedic and has yet to really be tested on an active scene.

However, Lumpkin’s desire to be a part of a team and a firefighter, combined with his athletic background, should make for a quality firefighter ready to serve the citizens of Clayton County.

“I really wanted to be a firefighter when I was little,” said Lumpkin. “Just seeing the big red trucks go down the highway or down the streets blaring the lights and sirens, and now I have the opportunity to be in the back seat looking at it or going up to a scene.”

Coronavirus pandemic: Updates from around the world