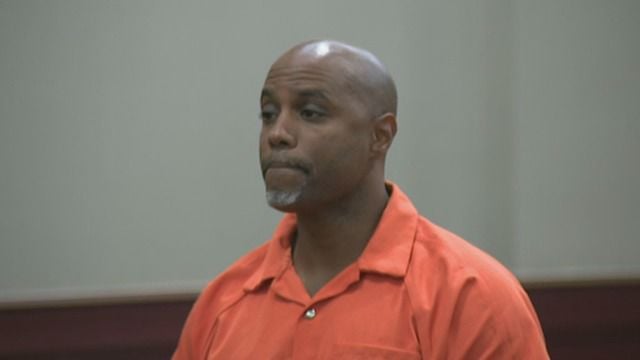 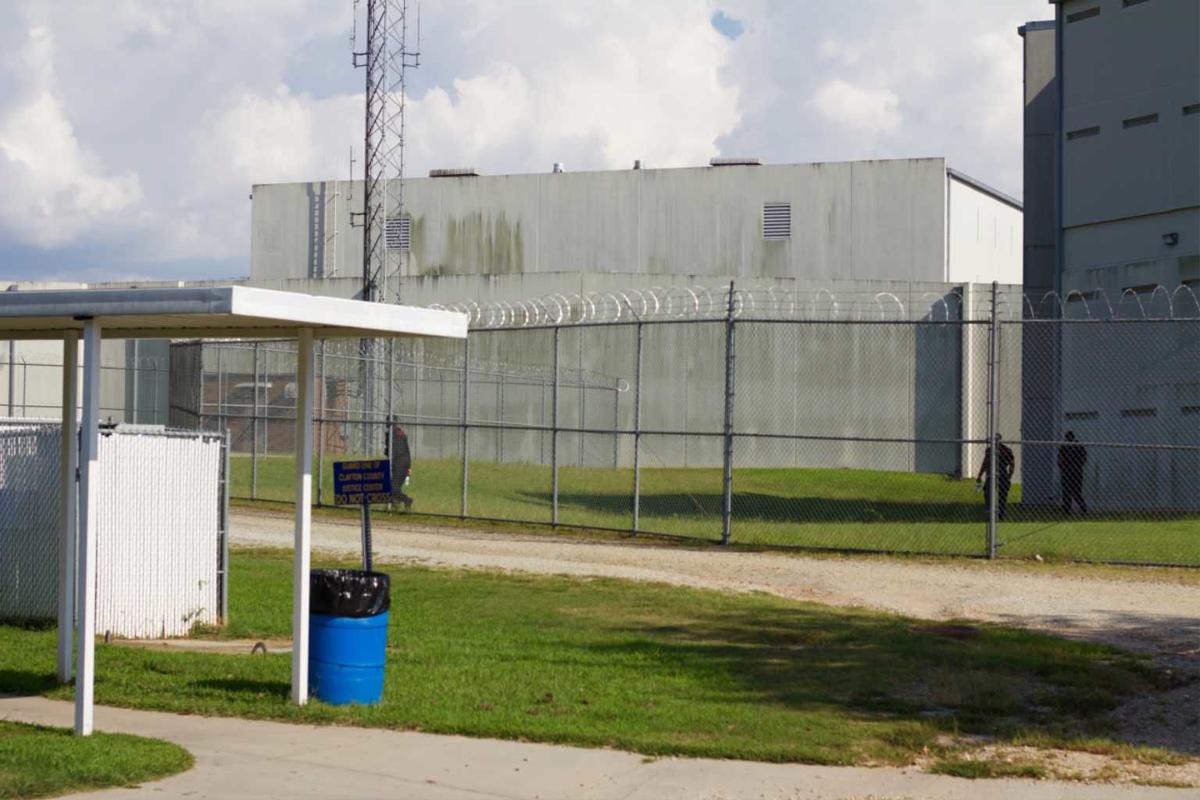 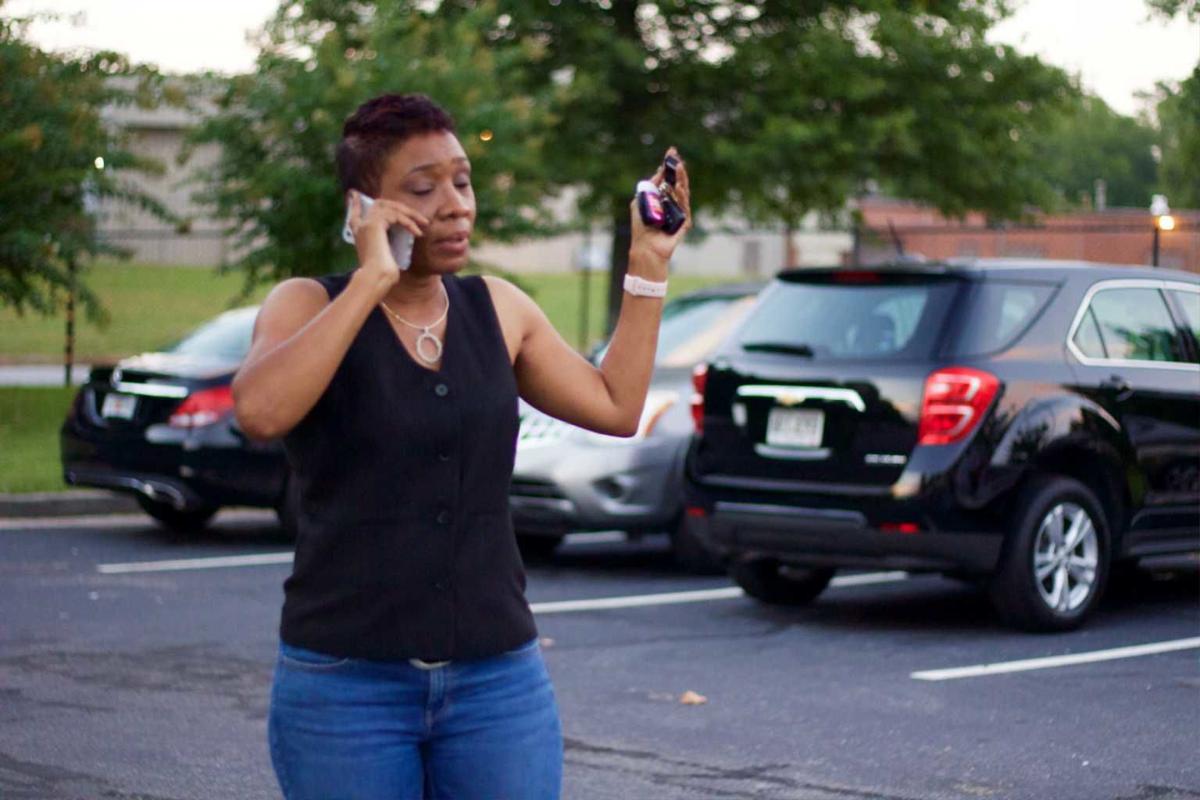 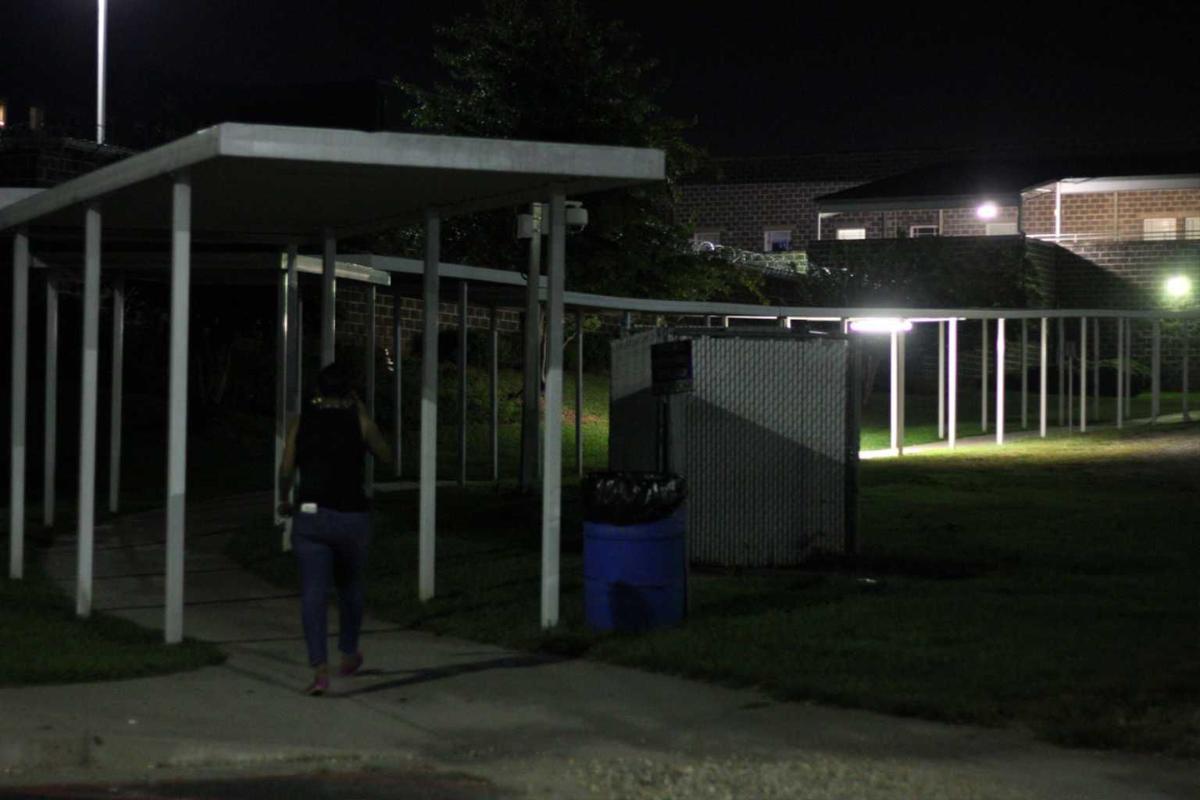 Gerrian Hall walks toward the jail entrance around 9:20pm Tuesday night as her husband, Robert Hawes, is about to be released. (Staff Photo: Robin Kemp) 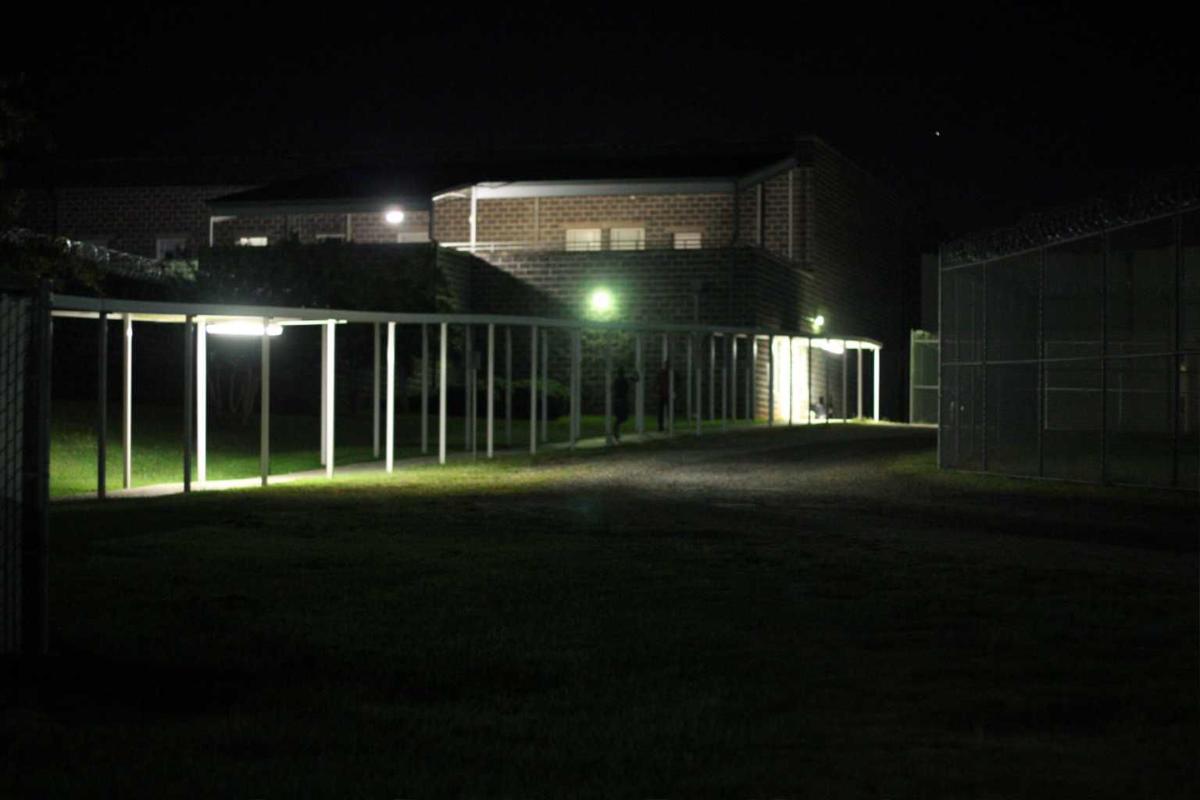 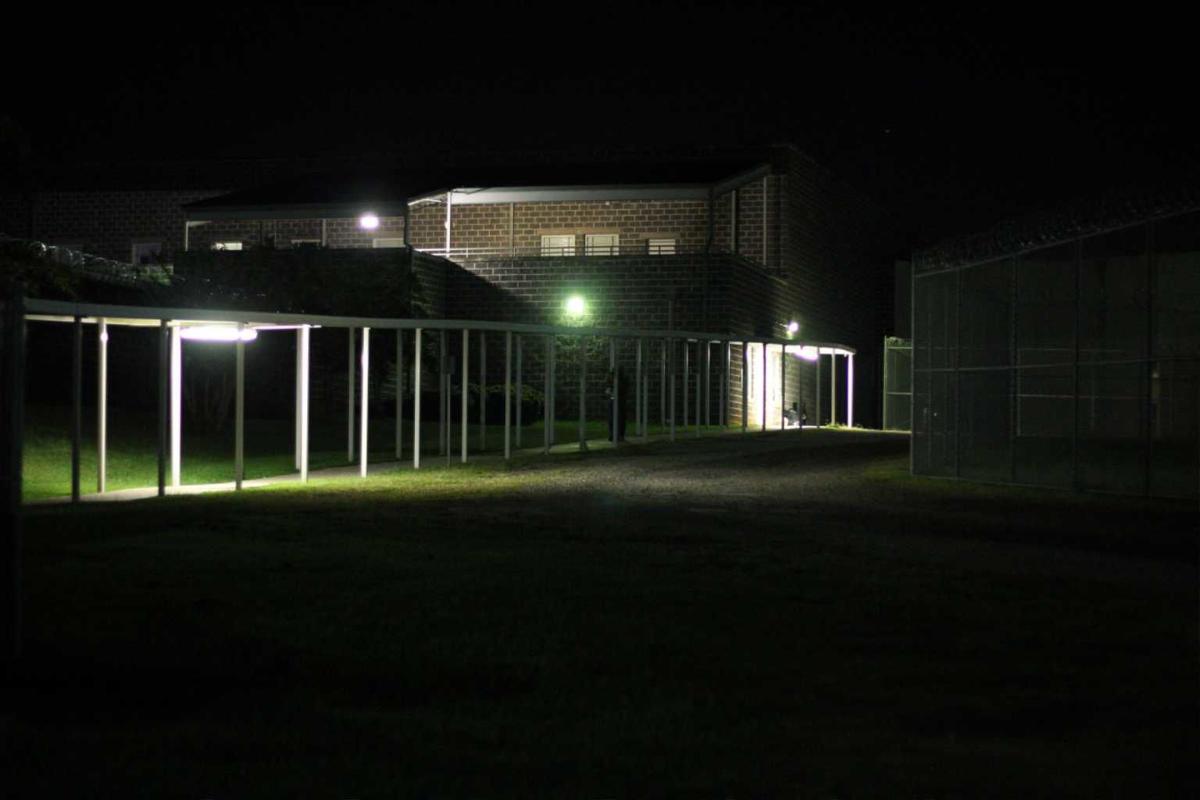 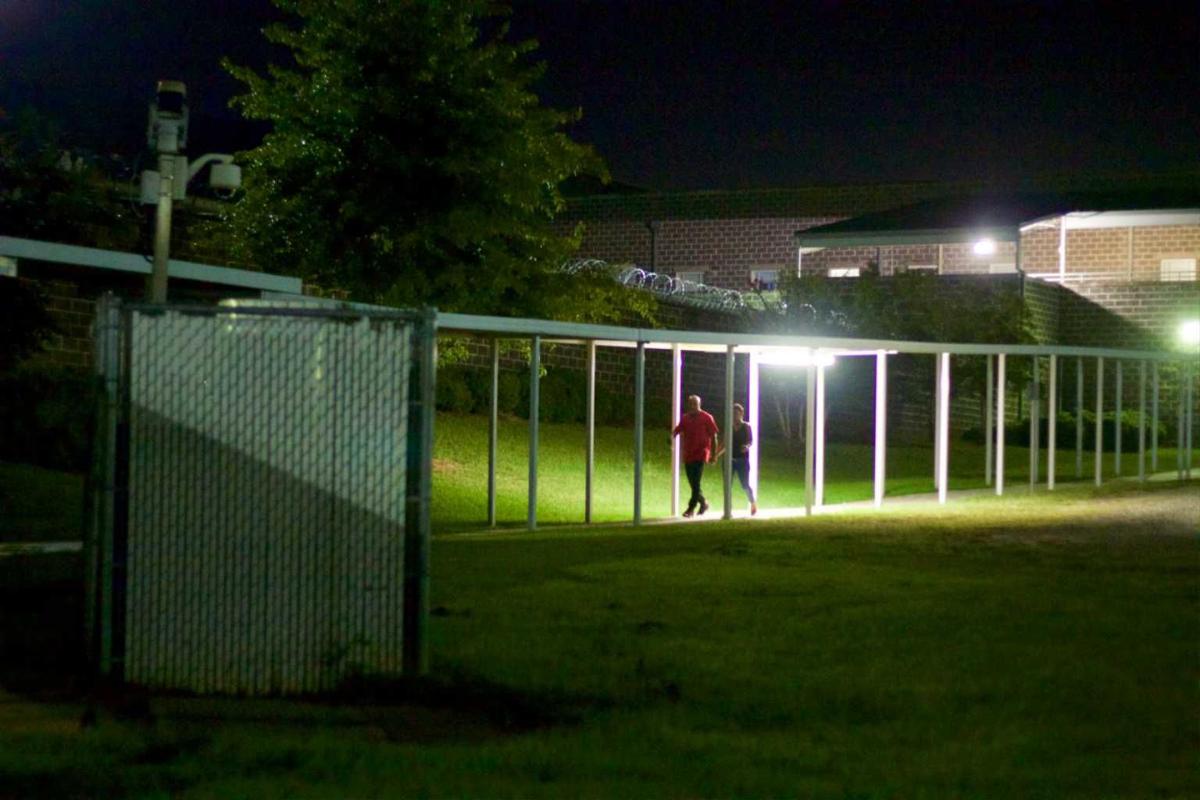 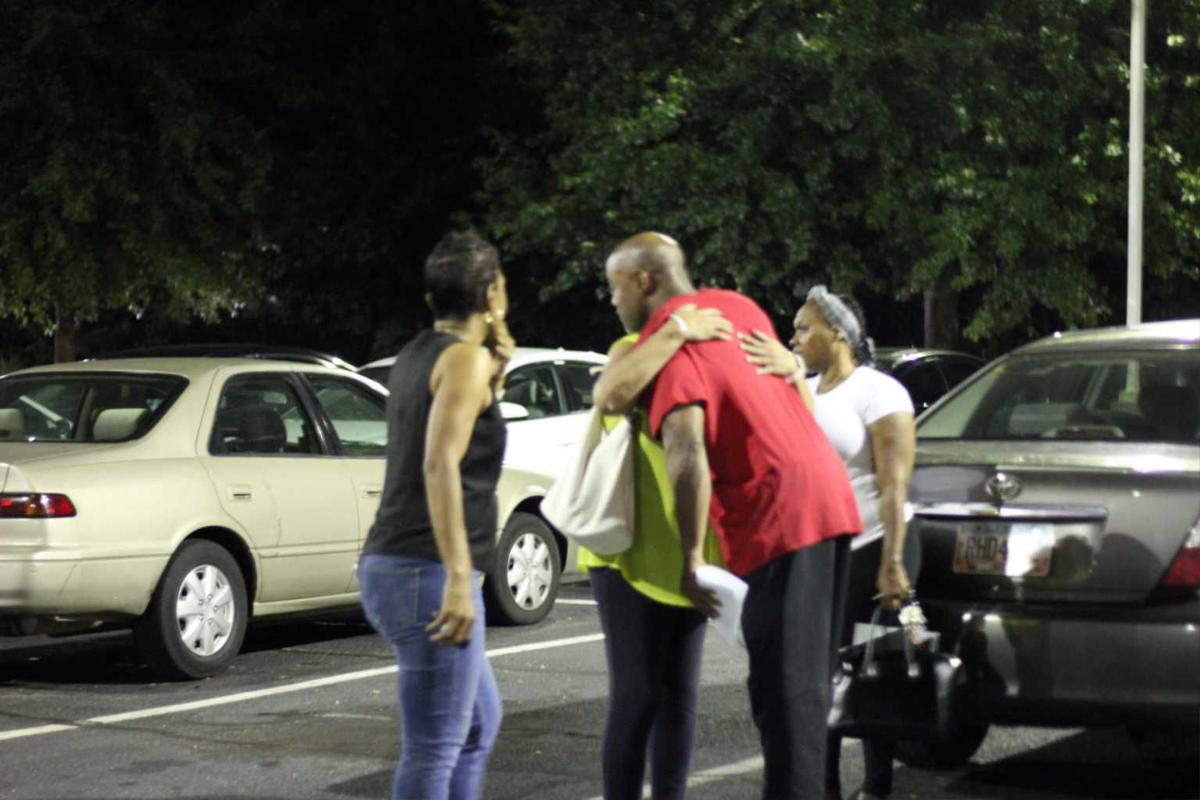 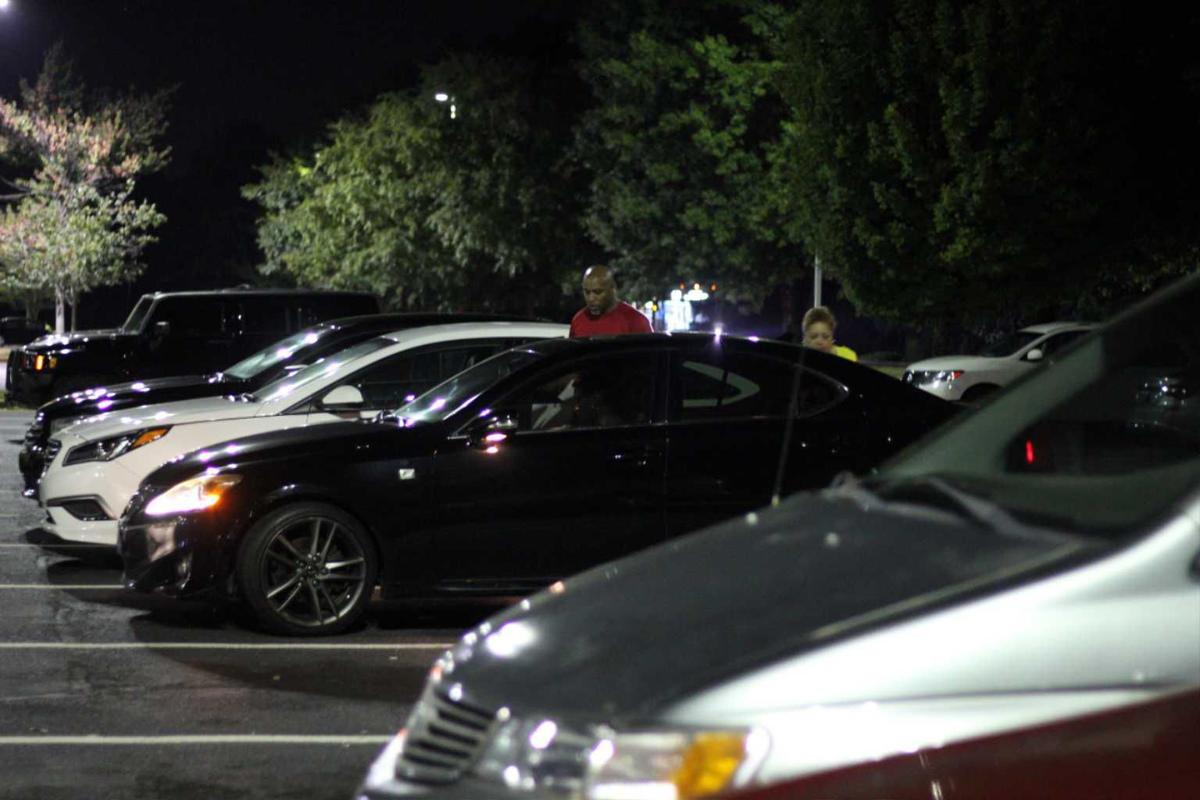 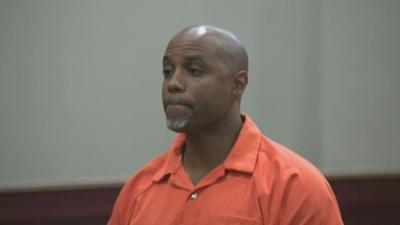 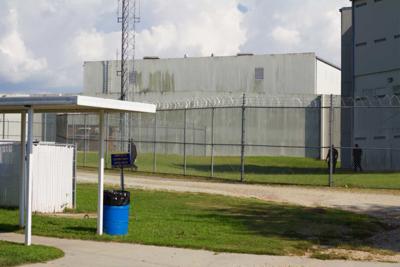 Gerrian Hall walks toward the jail entrance around 9:20pm Tuesday night as her husband, Robert Hawes, is about to be released. (Staff Photo: Robin Kemp)

Hawes walked free about 9:20 p.m., approximately one hour after his name disappeared from the online list of Clayton County inmates. When an inmate’s name disappears after posting bond, the inmate no longer shows as being in custody.

Hawes’ wife, Gerrian, who Hill had arrested several days ago, ran to her husband, embraced him, then walked hand in hand to the car where Robert Hawes’ mother waited.

Hawes is charged in connection with what Hill says was a false report that he had sold his missing service weapon to a nonexistent Atlanta police officer and for allegedly writing a fake ticket as cover for a stripper who didn’t want her boyfriend to know she’d been out all night.

Tuesday morning, Hawes stood at attention in the aisle apart from other inmates in Judge Sonya George’s courtroom Tuesday morning. His wife, Gerrian, arrived soon after, looking dismayed as her husband stood in jumpsuit and chains amid his former colleagues.

Bond was set at $26,000 and Hawes’ attorney, Thomas M. Florio, said bond would be posted the same day.

“Do you have anything to say on behalf of your client?” Judge George asked.

“No, your honor,” Florio responded.

Hawes was then escorted from the courtroom.

Outside the courthouse, a tearful Gerrian Hawes said she was enroute “to make my husband’s bail.”

Gerrian Hawes is herself free on $1,500 bond after she and her husband said Hill had her arrested and charged with sending harassing communications. She is scheduled to return to Clayton County Magistrate Court on Sept. 6 at 11:30 a.m. before Presiding Judge Richard C. Brown.

According to a post on Hill’s Nixle account, Hawes was supposed to have turned in his missing pistol, a Glock 42, so that it could be replaced with a Glock 43 last October. Hill alleges that “Hawes turned in a Glock 42 that he bought from a pawn shop instead.” A few days later, while logging in the gun, “the Sheriff’s Officer quartermaster… realized that the serial number did not match.” According to Hill, “Hawes said he sold a Glock 42 to a[n Atlanta Police Department] officer and must have mistakenly sold the officer the Sheriff’s Office weapon instead.” The quartermaster then contacted a supervisor after Hawes allegedly did not respond to the quartermaster’s attempts to contact him between Nov. 3 through 6, 2017 as to whether he had recovered the weapon from the APD officer.

Hill alleges that Nov. 7, 2017, Hawes filed a false report with the Sheriff’s Office stating that in July of 2015 he accidentally sold the Sheriff’s Office Glock 42 to an Atlanta Police Officer named Deshaune Burns. According to Hill, Hawes claimed he made several attempts to contact Burns, but found out he moved out of state. “It was discovered that no such officer ever existed and that Hawes had made the identity of Deshaune Burns up,” according to Hill.

In addition, Hill claims that “The weapon Hawes turned in instead of his Sheriff’s Office issued weapon was purchased by him on Dec. 22, 2015. This is important because it showed that the purchase was made five months after he claimed he sold his county issued Glock to a APD Officer that did not exist.”

During the course of the investigation, Hill says CCSO found Hawes had reported another service weapon lost or stolen in 2014, after “this weapon was left where his son and his son’s friends had access to it.” Hawes was placed on administrative leave without pay, and resigned — according to Hill — in lieu of termination.

Both Hawes and his wife, Gerrian, have denied that Hawes resigned in lieu of termination, saying that Hawes had simply resigned.

On Monday, Hill alleged Hawes “had resigned in lieu of termination from Atlanta PD for lying in an investigation as well.”

In addition, Hill claimed that CCSO found a ticket in Hawes’ car after his resignation, but that there was no corresponding arrest record for the woman named. CCPD contacted the woman, who “said she was an exotic dancer and that Hawes wrote her the ticket so she could show it to her boyfriend to explain why she was out all night.”

Hill also said that two CCSO lieutenants “failed to make proper notification” of a July 30 fraud warrant out of Henry County against Hawes’ son, with one deputy tipping off Hawes, according to Hill. The sheriff has alleged that Hawes’ son is a suspect in the missing firearms case. When CCSO deputies showed up the next day to arrest the son, Hill said, “Hawes told them his son was not home and showed displeasure that they were at his house.” Hill sent out an email Aug. 9 announcing one deputy had been demoted and another fired as a result, and that the case would be reopened.

The next day, according to Hill, Gerrian Hawes began emailing him about “love and fear.” The sheriff said he asked her to stop the emails, but she continued. Hill said after asking Gerrian Hawes a third time to cease the emails without success, he asked investigators to take the emails to a judge for review.

Hill said it was the same day that the Haweses posted to Facebook that Robert Hawes planned to run for sheriff. Gerrian Hawes was subsequently arrested on a charge of harassing communications.