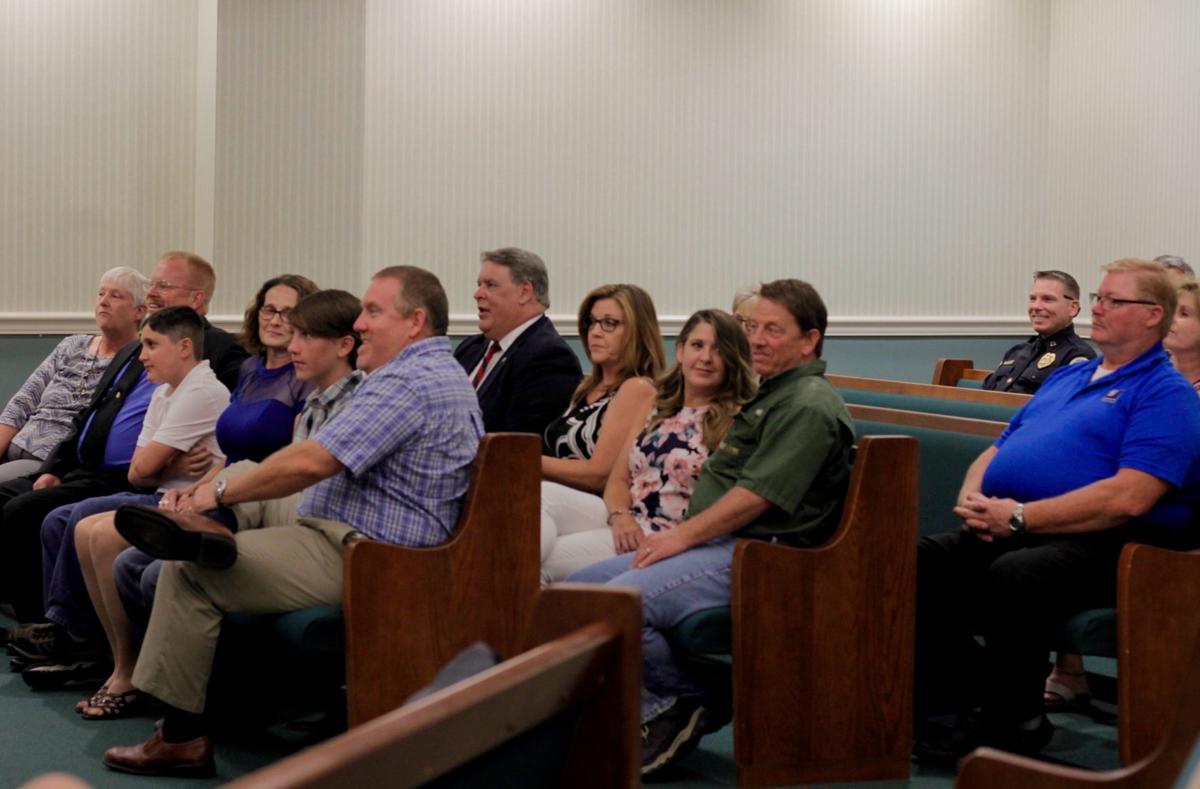 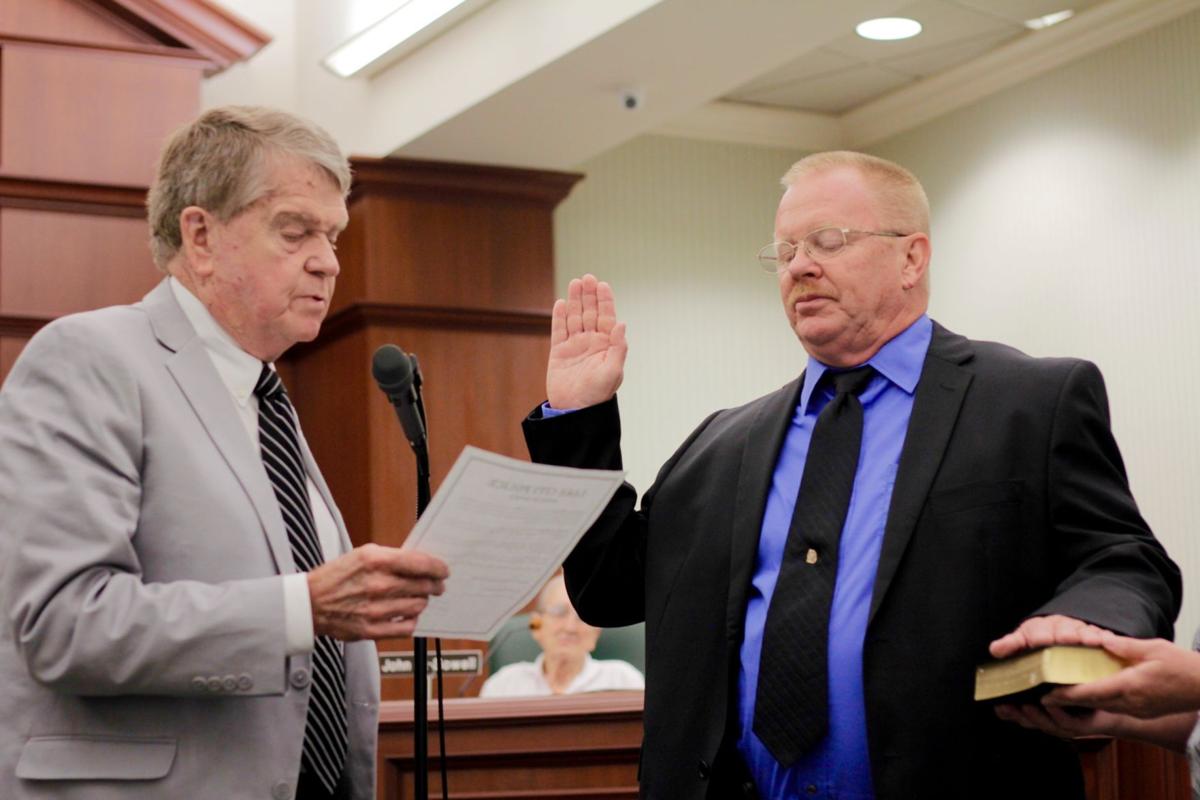 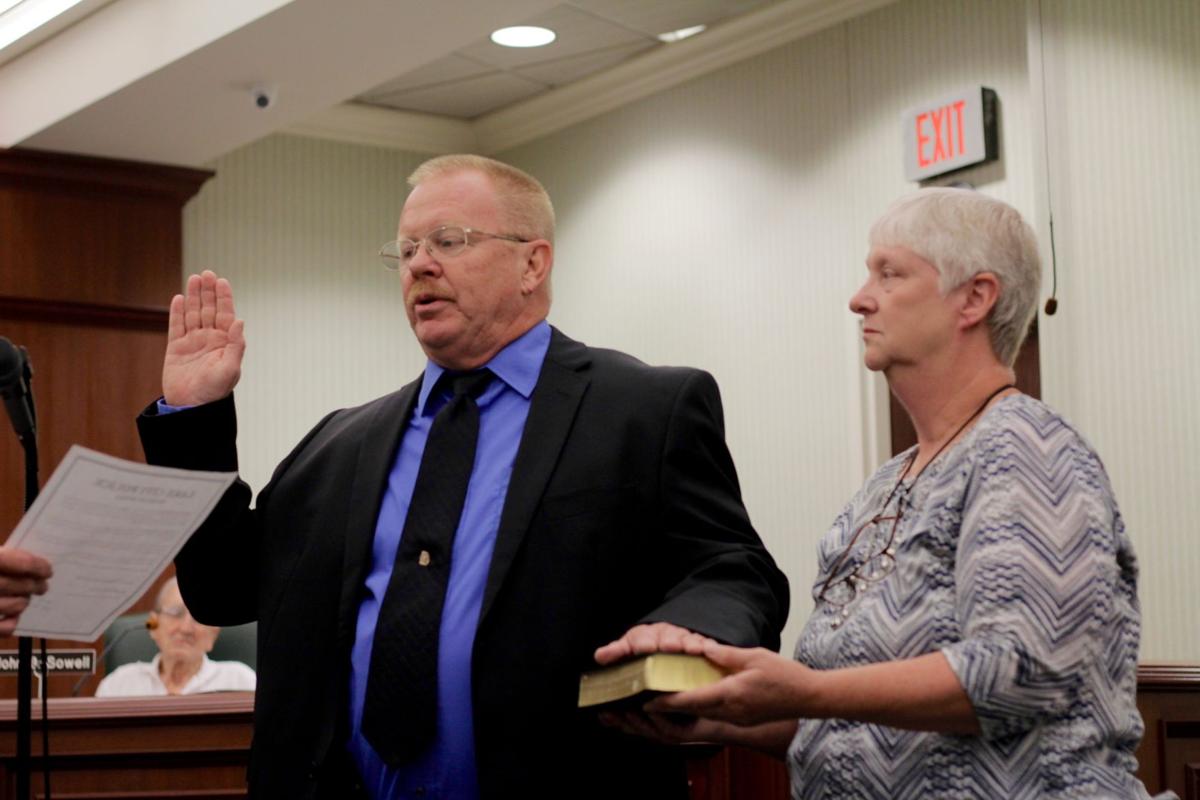 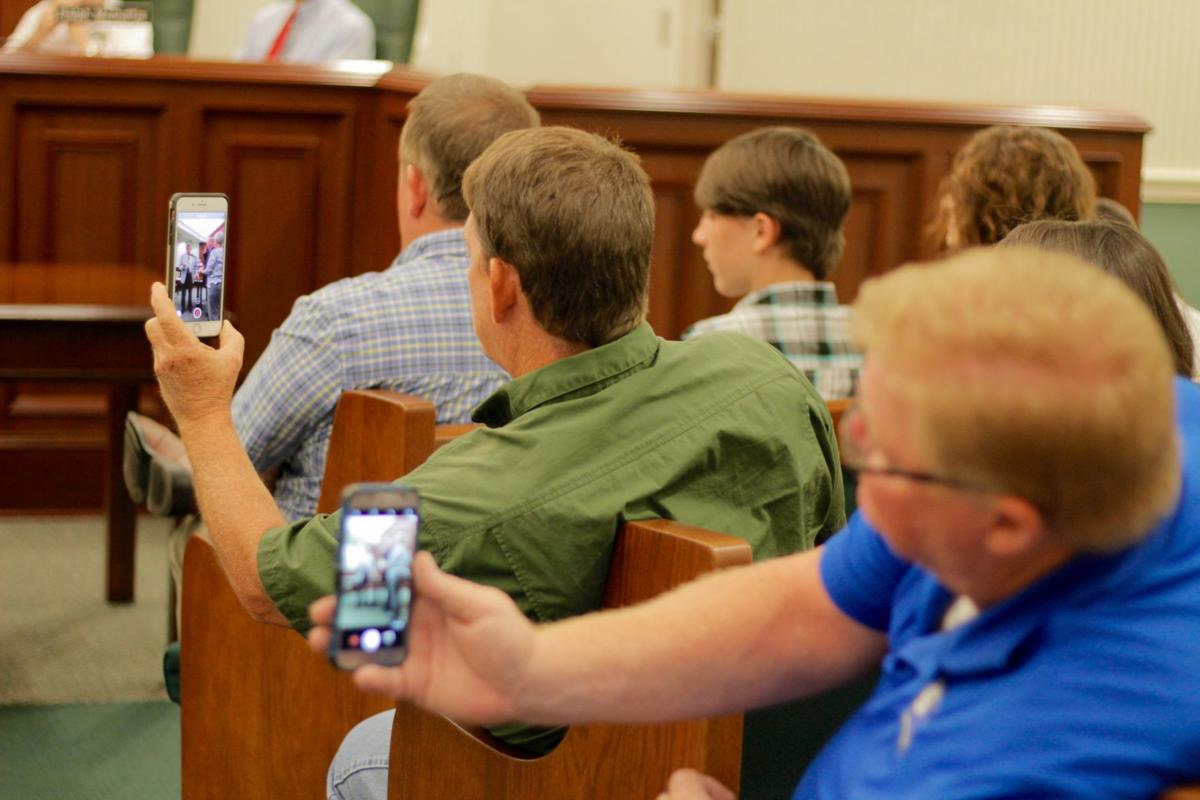 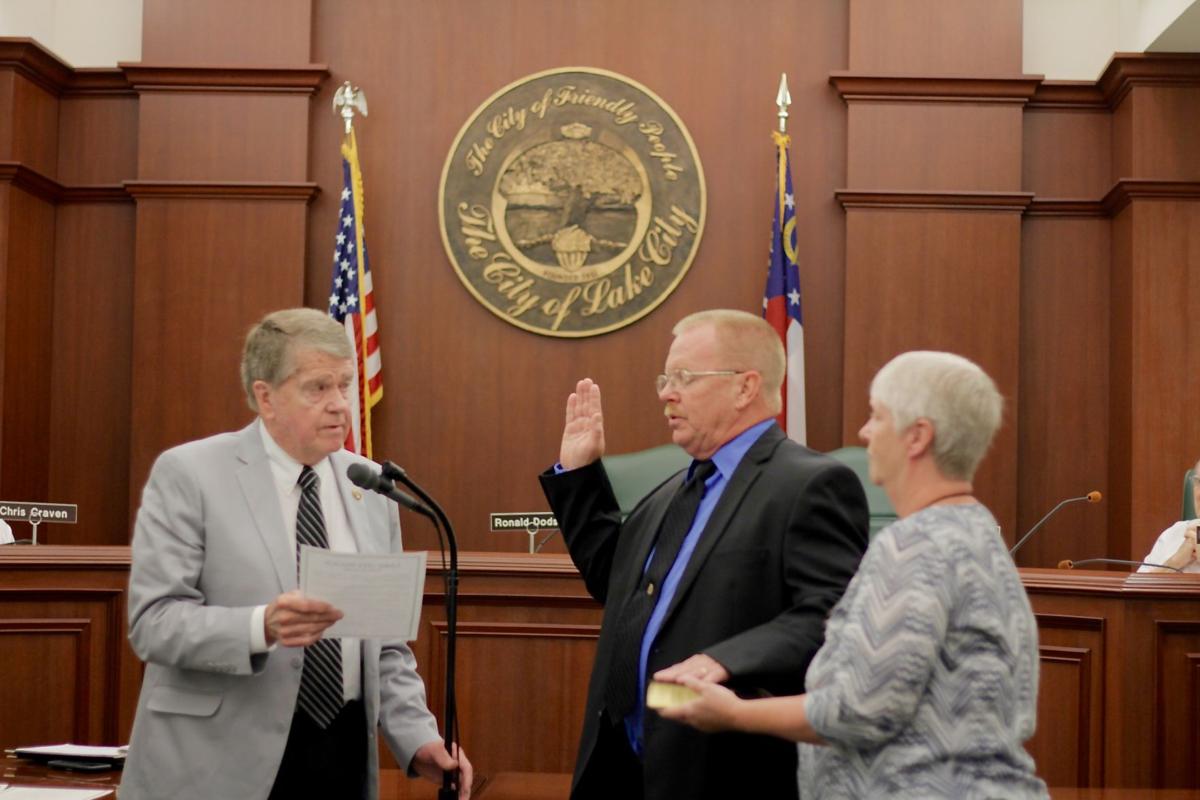 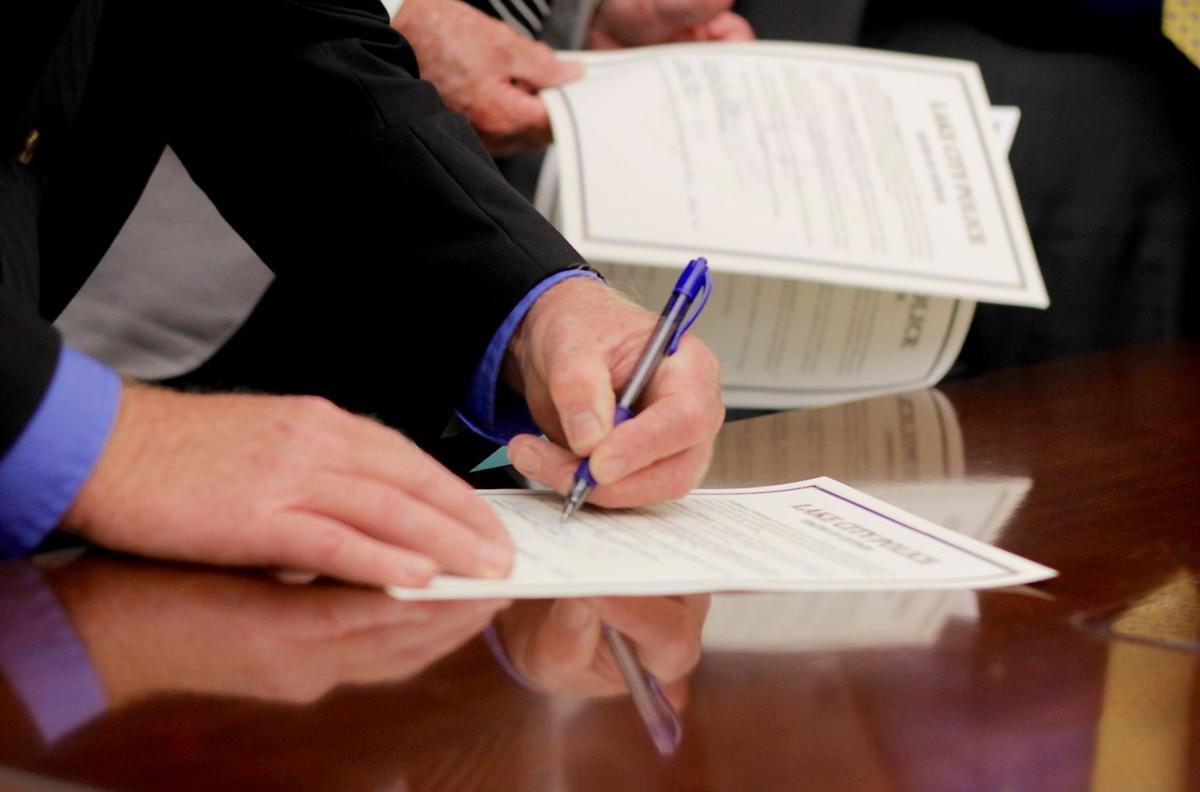 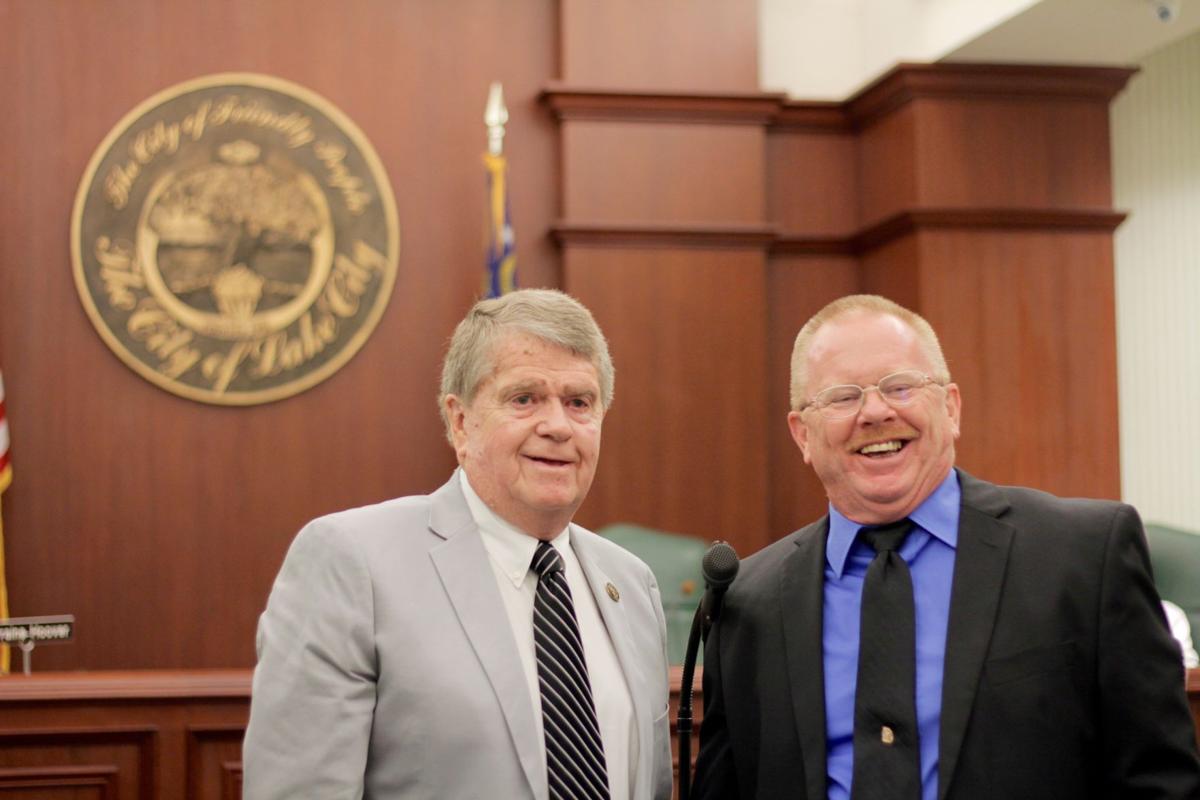 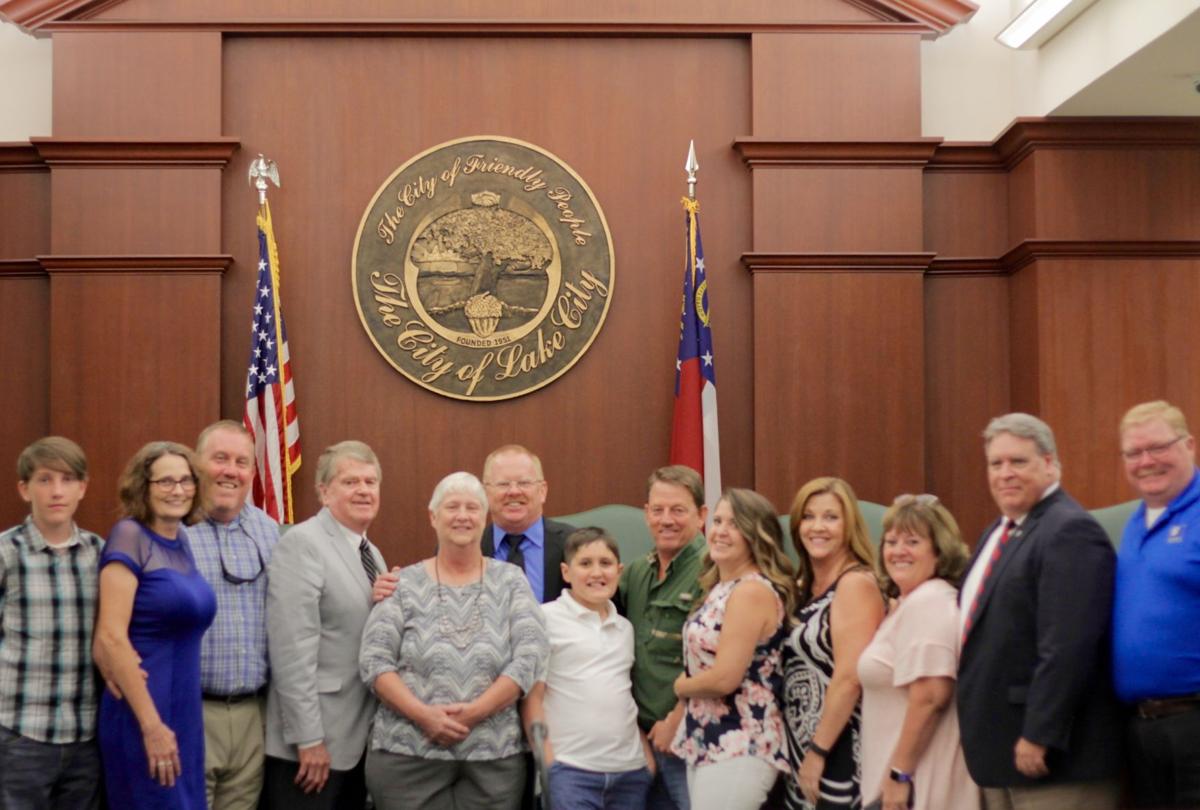 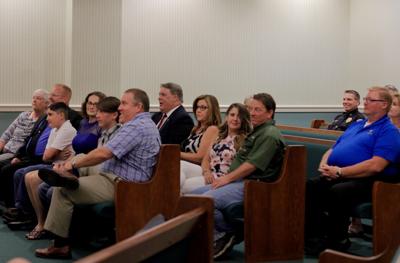 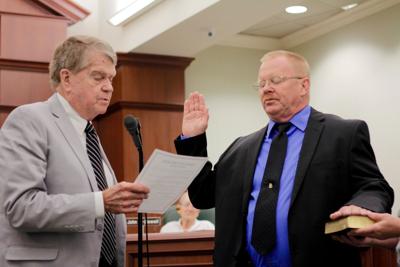 Also sworn in at the June meeting was Councilman Chris Craven.

On Monday, Dodson swore in Chief Troy Whitmire, who replaces retired Chief David Colwell. Colwell joined Lake City Police Department in 1995 and was chief from 2003 until his retirement last month.

Whitmire comes to Lake City from Georgia Tech’s police department, where he served 11 years and was deputy chief for the past year and a half. Before that, he said, he spent two years working overseas for the defense contractor Blackwater. Prior to Blackwater, Whitmire said, he was a bomb tech, SWAT officer, and SWAT leader for the City of Atlanta.

What challenges does a small town like Lake City pose for law enforcement?

“A small town doesn’t have as much resources to put officers on each problem,” Whitmire said. “You want to make sure you’re in the right place and use smart deployment.”

After taking the oath, Whtmire promised to be “responsive, progressive… and as transparent as the budget will allow me to be,” drawing chuckles from the chamber.

Whitmire lives in Douglas County with his wife of 22 years and has four children and six grandchildren.

In other council business, most discussion centered around a proposed noise ordinance that would measure noise violations in terms of distance instead of decibels, and which could ban lawnmowing and leaf-blowing on Sundays.

The proposed ordinance would ban noise that is “plainly audible at a distance of 100 feet or more,” eliminating the need for a decibel meter that has to be calibrated and a trained operator who can interpret the decibel readings and go to court on noise issues.

In particular, the proposed ordinance would crack down on blasting radios and loudspeakers, shade-tree mechanics revving their engines, late-night car-crushing, and early-morning leaf-blowing.

One problem, Dodson said, happens when a nearby car-crushing operation accidentally sets off explosions. He said this happens when a car has a little bit of gasoline or fumes in the tank, or when the car has old propane tanks inside.

“A couple of times, propane tanks have gone off at 2 or 3 a.m.,” he noted. “One time, it actually blew the windows out of the machine the operator was using to crush it.”

Councilmembers and citizens discussed different scenarios for when people might want to cut their grass. For example, some people who do shift work might not be able to cut their grass except early in the morning or late at night on weekends. Some suggested allowing yard work after noon on Sundays, rather than an outright Sunday ban.

Nothing in the ordinance is set in stone yet, according to Dodson, who encourages citizens to give feedback about the proposal before the next council meeting.

Dodson also noted that the state lump sum payment for the remaining jet fuel tax should arrive at Clayton County any day now. Once that happens, he said, Lake City and the other municipalities will have to wait 10 days before it arrives.

“This is not a windfall,” he cautioned.

In other business, the council discussed the possibility of hiring a temp services company, Office Team, to fill a human resources payroll position. City Manager Christopher Leighty said the position is budgeted at $45,000 to $48,000 per year, including benefits, but the city has not yet been able to fill the vacancy, which is not entry-level. The council favored hiring a candidate through a temp agency because of the try-before-you-buy factor.

On the other hand, Leighty said, “You’re paying the temp services for some of what we’d be paying. It’s 5 to 35 percent, annuitized to a yearly salary. For example, at $40 an hour, if you hire after a month and a half, that’s about $15,000 to buy out the contract.”

Leighty added he was authorized to spend $5,000 “but wanted to come before the council and mayor with it. Morrow got their last finance director from this organization, and they’re happy with them.”

Lake City’s next work session will be held on July 25, from 9:30 a.m. until the conclusion of business at City Hall, 5455 Jonesboro Road. The work session is open to the public. Interested citizens who would like to place any business on the agenda should call City Hall at 404-366-8080.

DICK YARBROUGH: Some random thoughts on some random subjects in the new year

HAL BRADY: What about cheating?