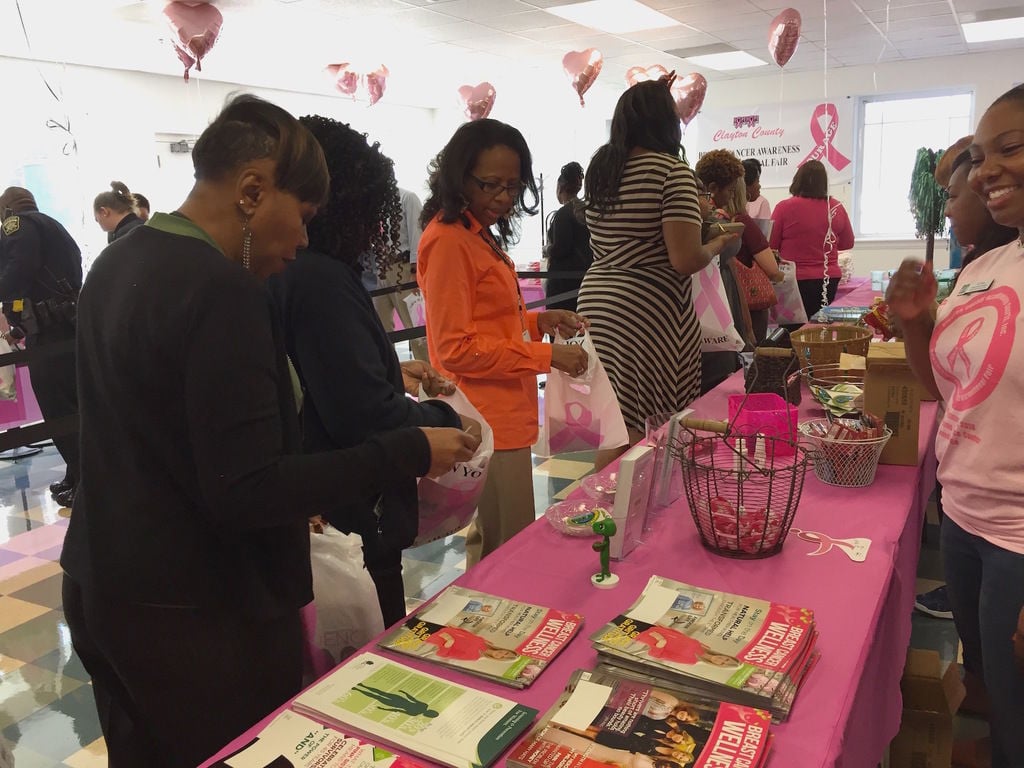 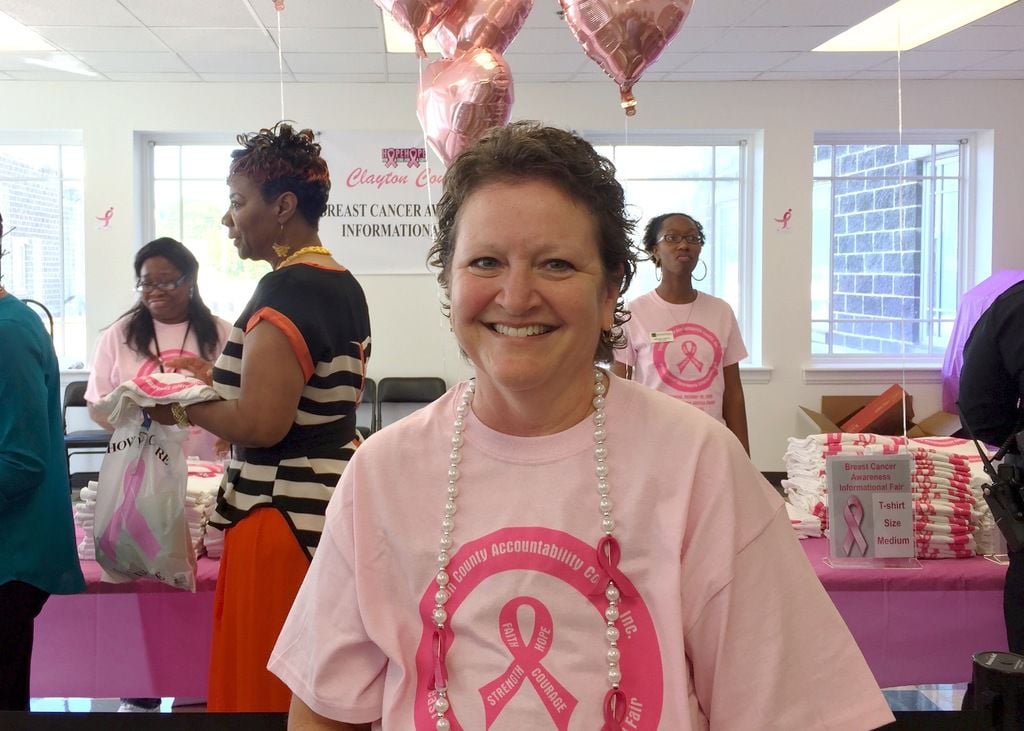 Lisa Anderson, a court reporter who has worked in Clayton County for 19 years, attended the fair this year for the first time as a breast cancer survivor. Anderson first discovered she had breast cancer in May of 2015 and underwent surgery earlier this year. (Staff photo: Chelsea Prince) 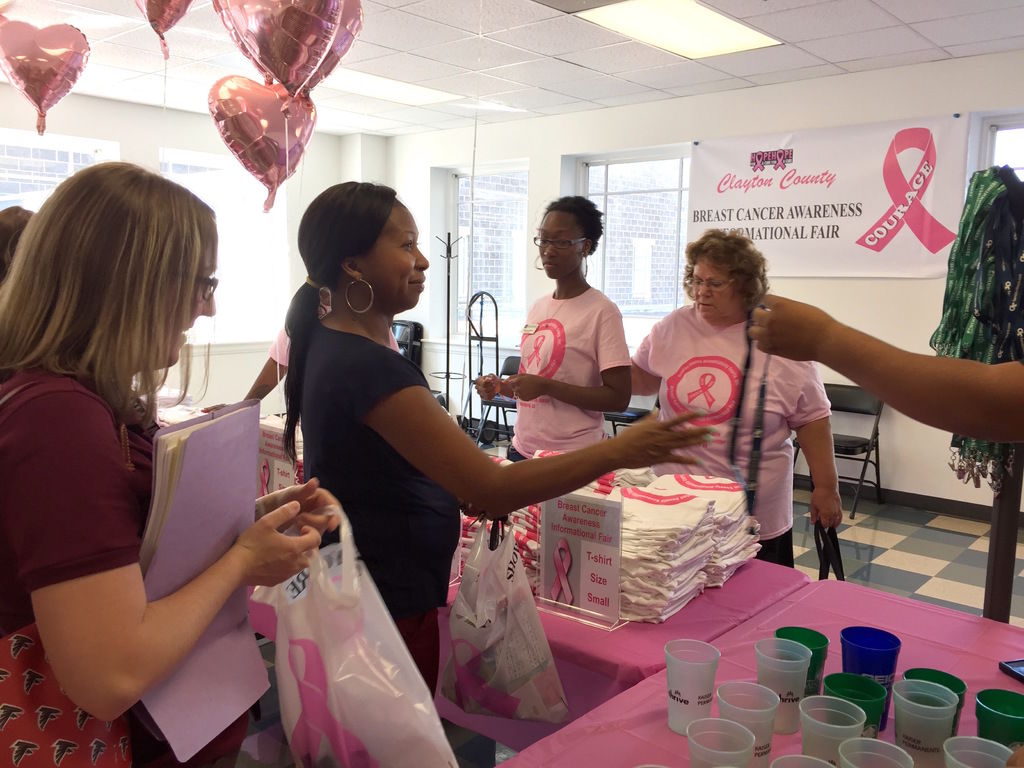 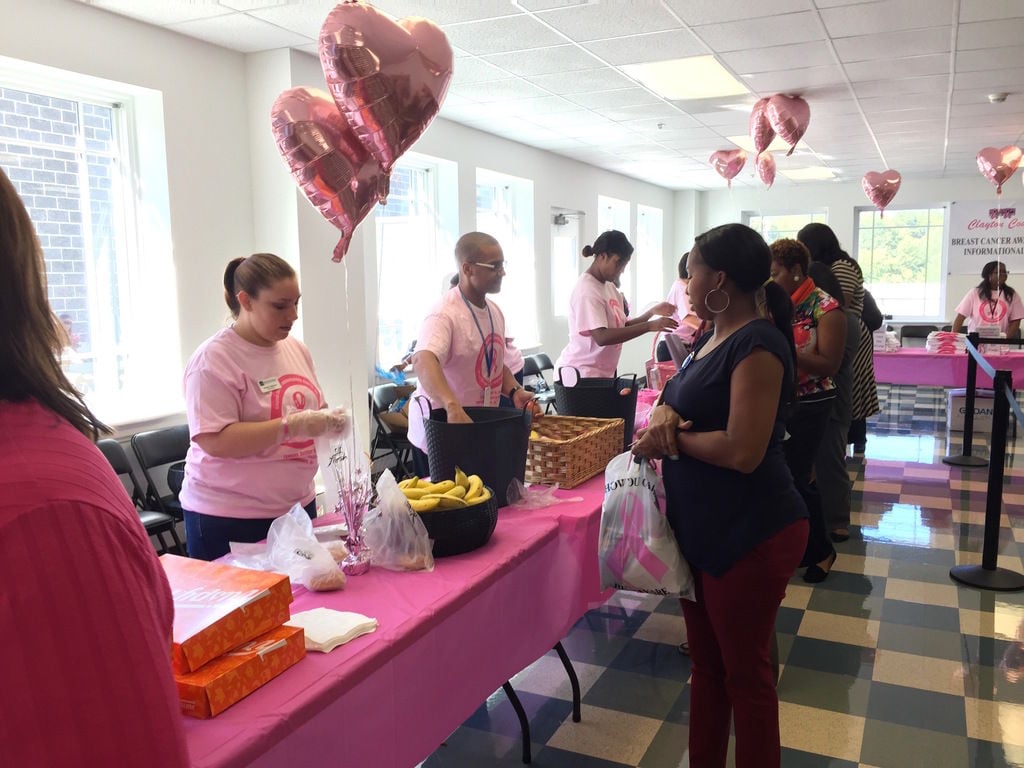 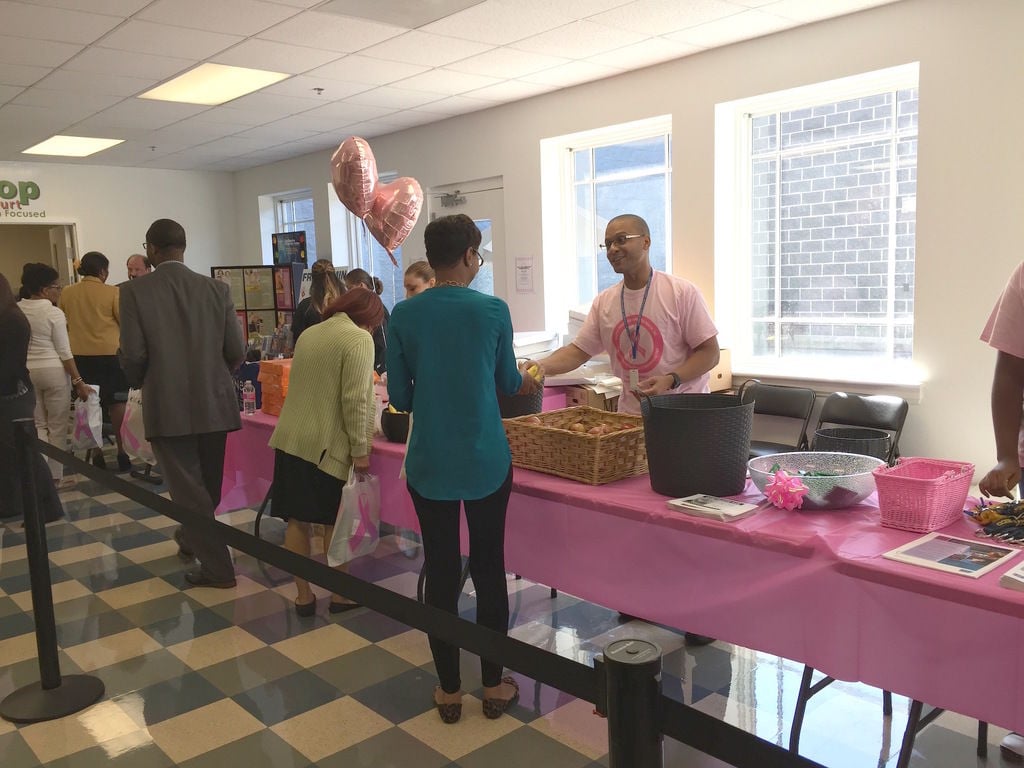 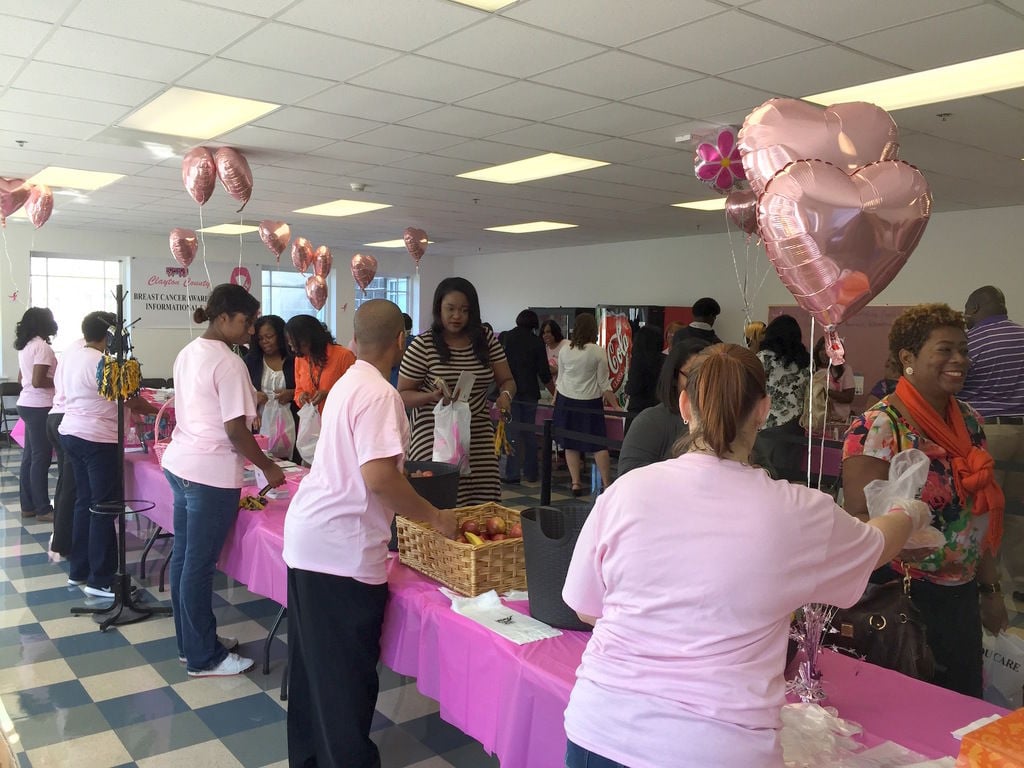 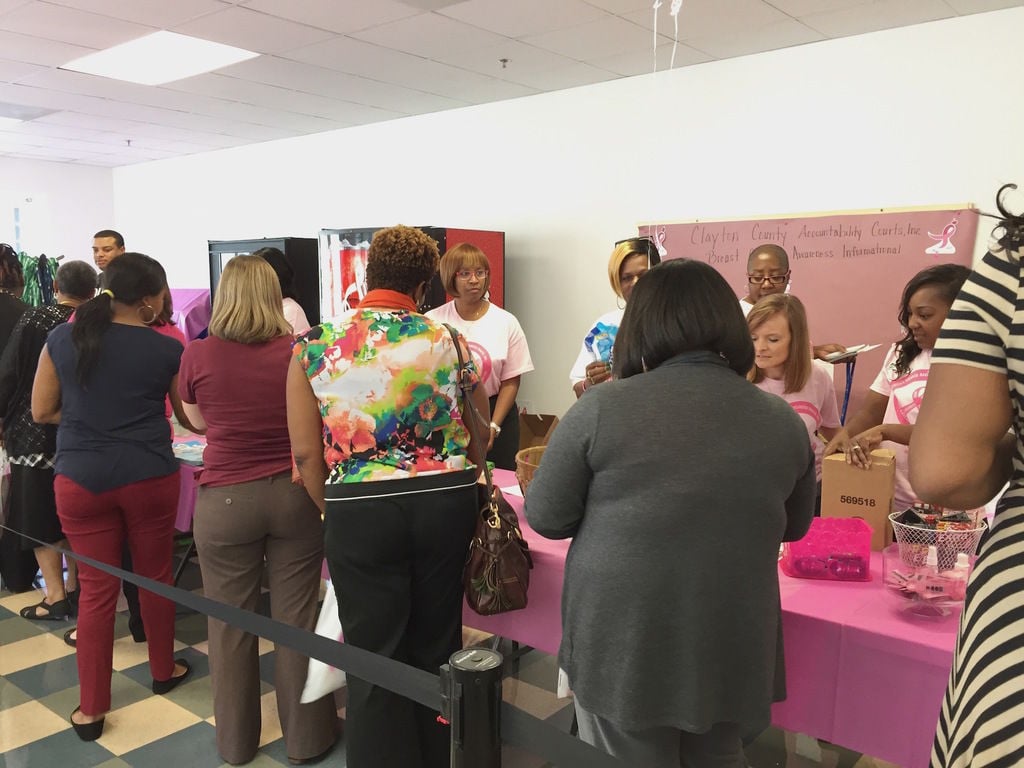 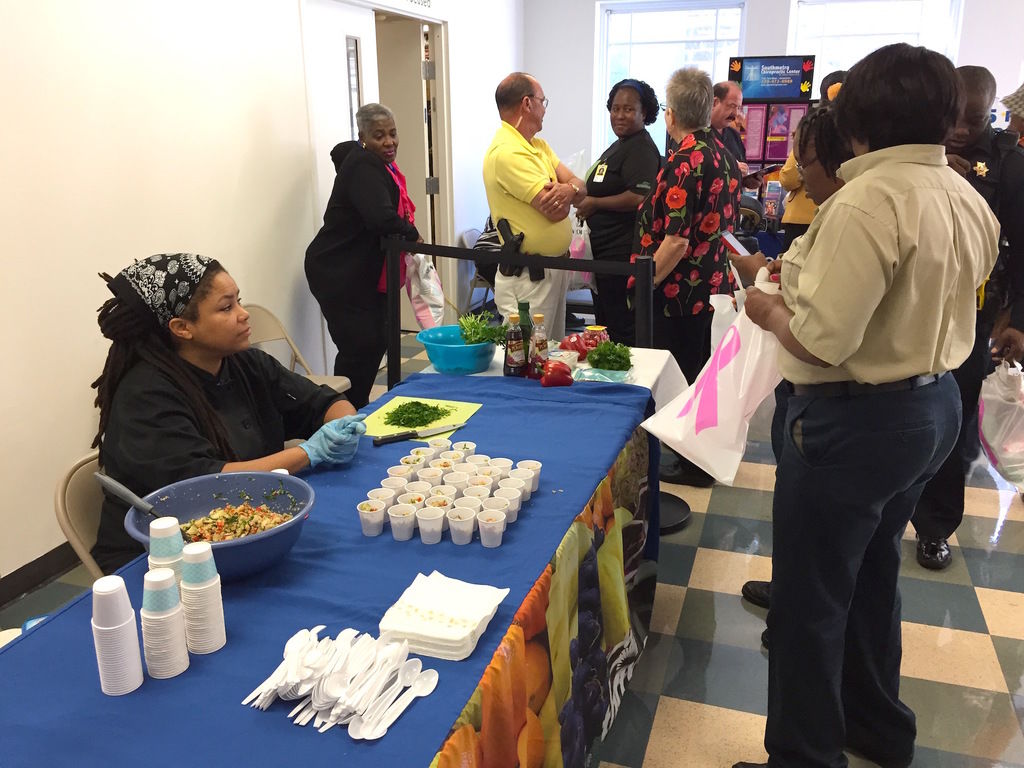 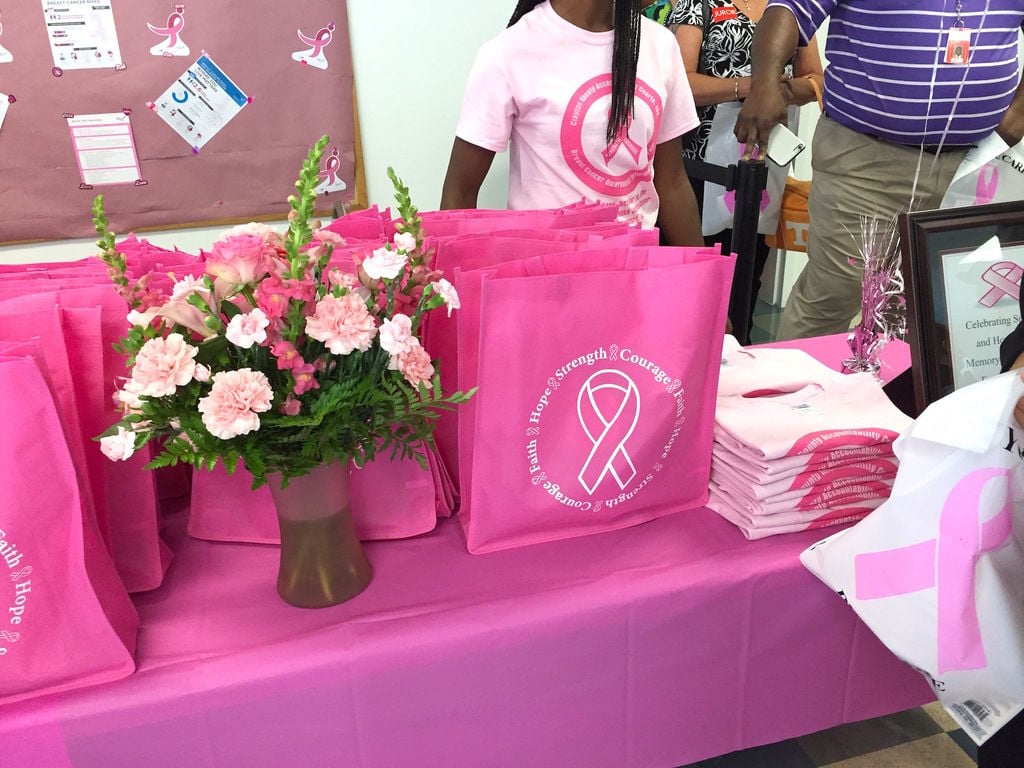 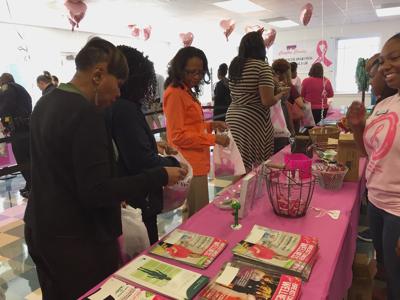 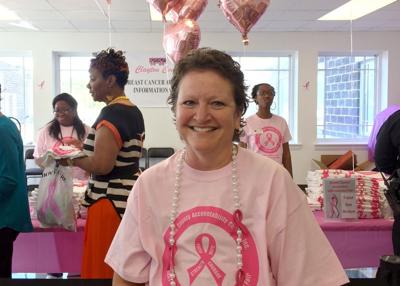 Lisa Anderson, a court reporter who has worked in Clayton County for 19 years, attended the fair this year for the first time as a breast cancer survivor. Anderson first discovered she had breast cancer in May of 2015 and underwent surgery earlier this year. (Staff photo: Chelsea Prince)

This is the fourth year the Accountability Courts has put on the fair for Clayton County employees, and it has grown every year. The fair is a special project of Toni Bell, Drug Court case manager and two-time breast cancer survivor.

“If we could just bring awareness, not just to women but men as well, that early detection saves lives.” Bell said of her efforts. “I’m living proof of that.”

She first discovered she had breast cancer at age 31 due to proactive self-examination. Breast cancer runs in Bell’s family, and her mother, a retired nurse, instilled in her the need to “know your body” from an early age. If you know your body, she said, you can tell when something is wrong.

Through the promotion of the Breast Cancer Awareness Informational Fair, Bell hopes to spread the message that breast cancer health should be proactive and should never be taboo. “If you are afraid, talk about it, tell somebody,” she said. “Talk to your doctor.”

Lisa Anderson, court reporter for State Court Judge Tammi Hayward, was diagnosed with breast cancer in 2015 at the age of 45. This was her first year attending the fair as a breast cancer survivor.

Anderson, of Jonesboro, has worked in Clayton County for 19 years and reported for State Judge Morris Braswell before his retirement earlier this year.

Prior to her cancer diagnosis, Anderson had been under her doctor’s careful watch for early signs of the disease due to calcification in her breast tissue. She received twice yearly mammograms for two years up until 2014, when a biopsy cleared her for regular screenings. One year later, she felt a lump. Doctors told her it was cancerous.

In July 2016, doctors performed a double mastectomy and found stage 3 cancer in 17 of her lymph nodes.

“I was scared to death,” Anderson said of the diagnosis. “I tried to be strong for my kids.”

She credited the competency and encouragement of her doctors for helping her maintain a positive outlook throughout the ordeal.

Anderson’s teen daughters, ages 13 and 16, praised their mother for her strength, she said. The girls wrote Anderson encouraging notes to get her through her chemotherapy and radiation recovery. She posted them to her bedroom door, where they still hang today. One includes the lyrics to Rachel Platten’s “Fight Song.” Another reads, “Fight like a Bull,” a reference to Anderson’s maiden name.

Even when undergoing cancer treatment, Anderson maintained her court reporter duties, only missing a few days to rest and recover. When the chemotherapy caused her to lose her hair and she found her wig to be uncomfortable, Judge Braswell allowed her to wear a baseball cap in court.

During that stage in her recovery, Anderson said she didn’t feel herself. Her hair has grown back differently in color and texture, and she’s scheduled for reconstructive surgery in December. But though she may look different, she said, she’s still the same person.

“I feel great,” she said at the fair on Tuesday. “What could have been such a negative thing has turned into a positive. It’s made our family closer.”

Anderson said she hopes women and men will adopt good habits for breast health, starting with self-examination, and she’s happy to extend that message to co-workers who walked with Anderson this year through her cancer experience.

Fair attendees were treated to lunch donated by Shane’s Rib Shack on Jonesboro Road as well as other local restaurants. The event was sponsored by over 50 local and national businesses and organizations.

Cleaning out the attic, journalist discovers two letters written to him by the Unabomber

A nurse's training didn't protect her from vaccine misinformation. Now, she's one of the victims of Covid-19

FedEx is raising its shipping rates