JONESBORO — Clayton County Sheriff Victor Hill has been indicted on four counts of allegedly violating the civil rights of four detainees at the Clayton County Jail.

The indictment, filed on April 19, states that four detainees identified by initials only were strapped into a restraint chair “for a period exceeding that justified by any legitimate non punitive government purpose.”

According to the Clayton County Sheriff’s Office Inmate Restraint Chair policy, the chair may be used by security staff “to provide safe containment of an inmate exhibiting violent or uncontrollable behavior and to prevent self-injury, injury to others or property damage when other control techniques are not effective.”

The restraint chair is not an authorized form of punishment. 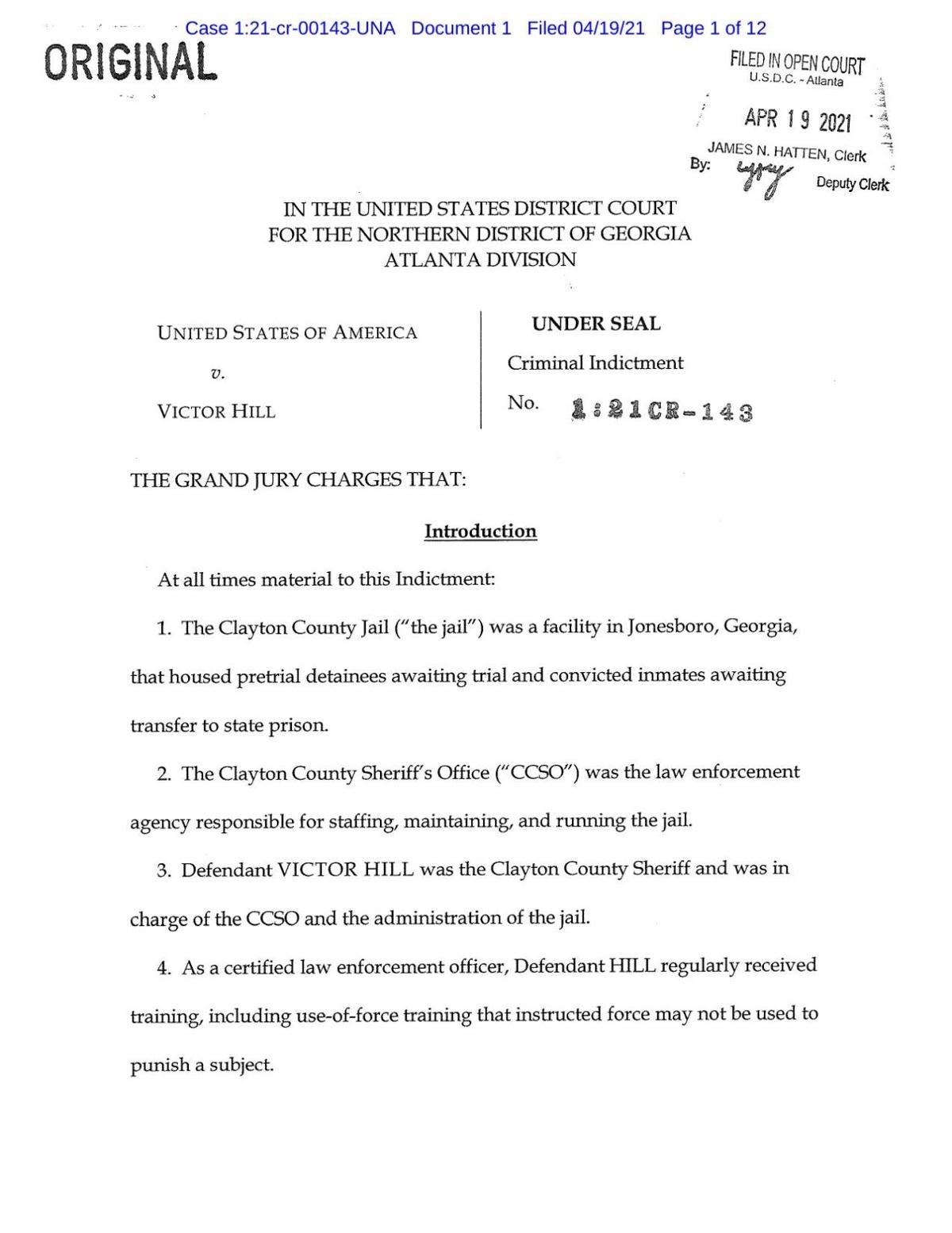 The indictment alleges, victim J.A. was ordered into the chair by Hill and left for several hours following an exchange with the sheriff that involved swearing and threats.

Victim C.H. was ordered into the chair via a text message when a Clayton County police officer sent him a photograph of the defendant in cuffs in the back of a squad car. C.H. was allegedly left in the restraint chair for several hours.

Victim J.H. “was not combative and never posed a threat to anyone” was placed in the chair and left for several hours during which he was unable to use the restroom. J.H. ended up urinating on the restraint chair.

Both C.H. and J.H. were subjected to swearing, name calling and threats from Hill while in the chairs.

Victim G.H., too, was allegedly ordered into the chair by Hill after the sheriff confronted G.H. inside the jail. The order was given after G.H. had been interacting with jail employees for more than 30 minutes “during which time he appeared cooperative and compliant.”

G.H., also known as Glenn Howell, ended up in the Clayton County jail following and April 27, 2020 arrest on a charge of making harassing phone calls.

The charge came after Hill got involved in a dispute between Howell, who owns a landscaping business in Butts County, and Lt. Josh Guthrie, a member of the CCSO and Butts County resident.

Not believing it was the sheriff calling, Howell made several attempts to obtain proof of identity using FaceTime. The following day an arrest warrant was taken out against Howell.

According to a lawsuit filed by Howell against Hill and the CCSO, Howell was placed in the restraint chair inside a suicide cell for six hours. The restraints on his wrists were “clinched so tight that both of his hands went numb and he was left with small wounds on both wrists.”

In a statement released Tuesday morning, Hill said he will fight the “political motivated” case and continue to “focus on the mission of fighting crime in Clayton County.”

“My legal team are the only ones authorized to speak on the details of this matter and they are confident about the facts of this case,” Hill said.

ATLANTA — Gov. Brian Kemp has appointed a three-person panel to make a recommendation as to whether Clayton County Sheriff Victor Hill should …

JONESBORO — Clayton County residents will have to pay more than $300,000 annually to fund the salary of an interim sheriff as well as paying t…