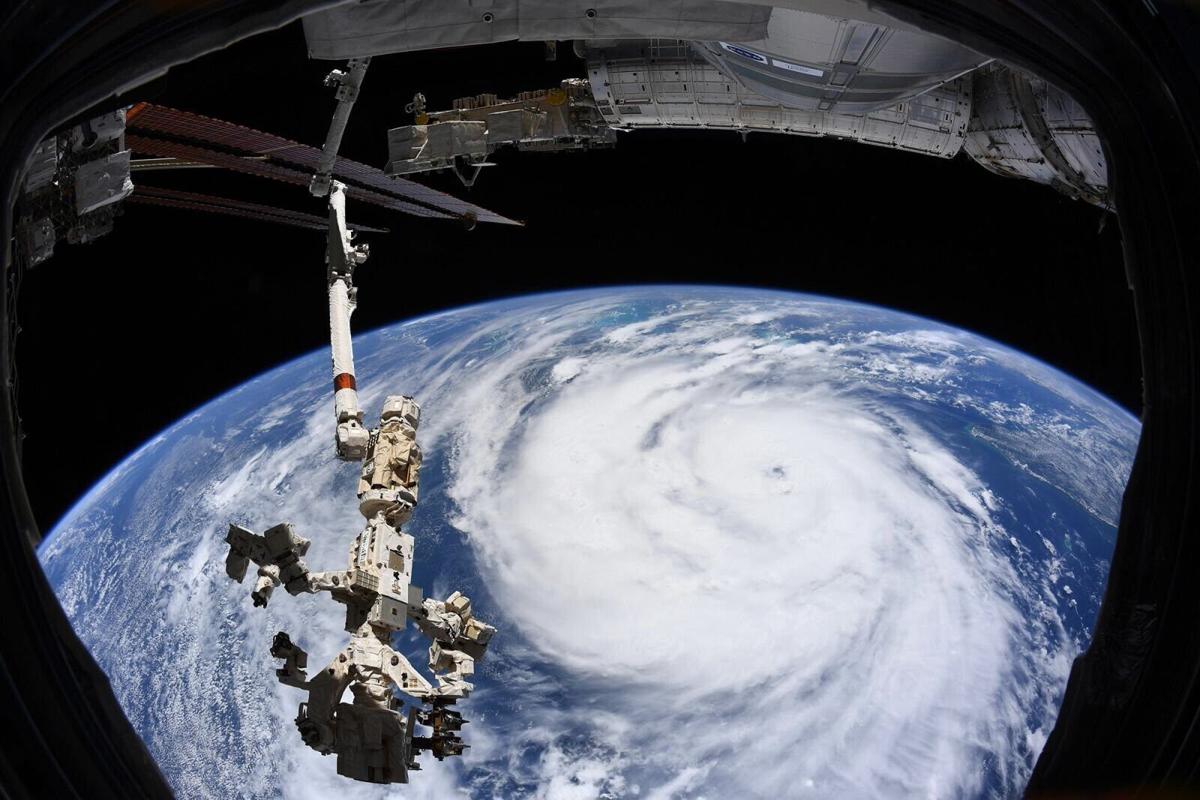 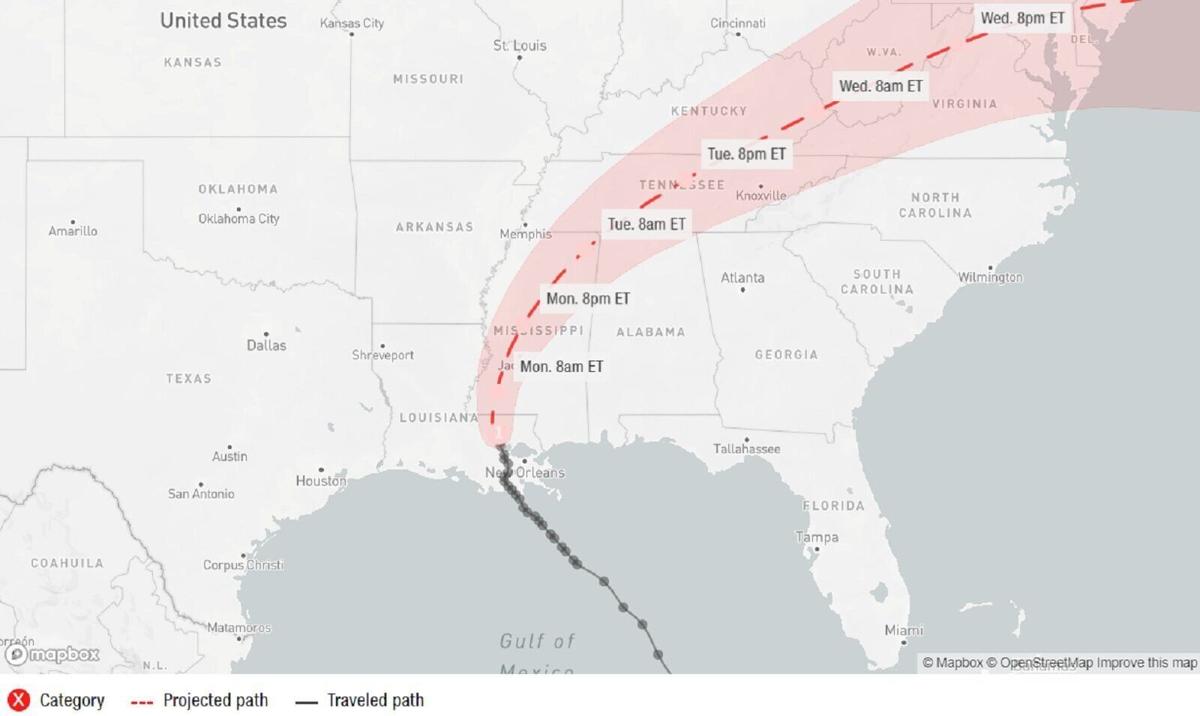 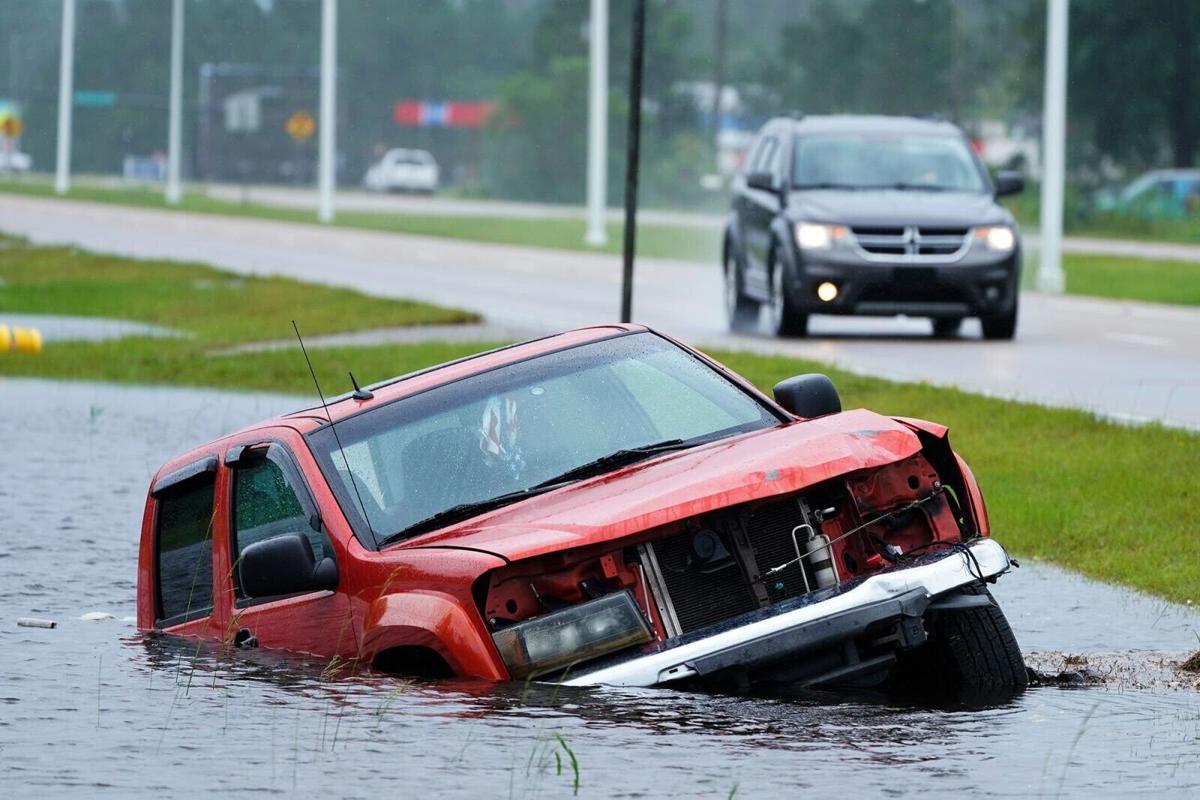 A vehicle is abandoned in a flooded ditch next to the highway Sunday in Bay Saint Louis, Mississippi. 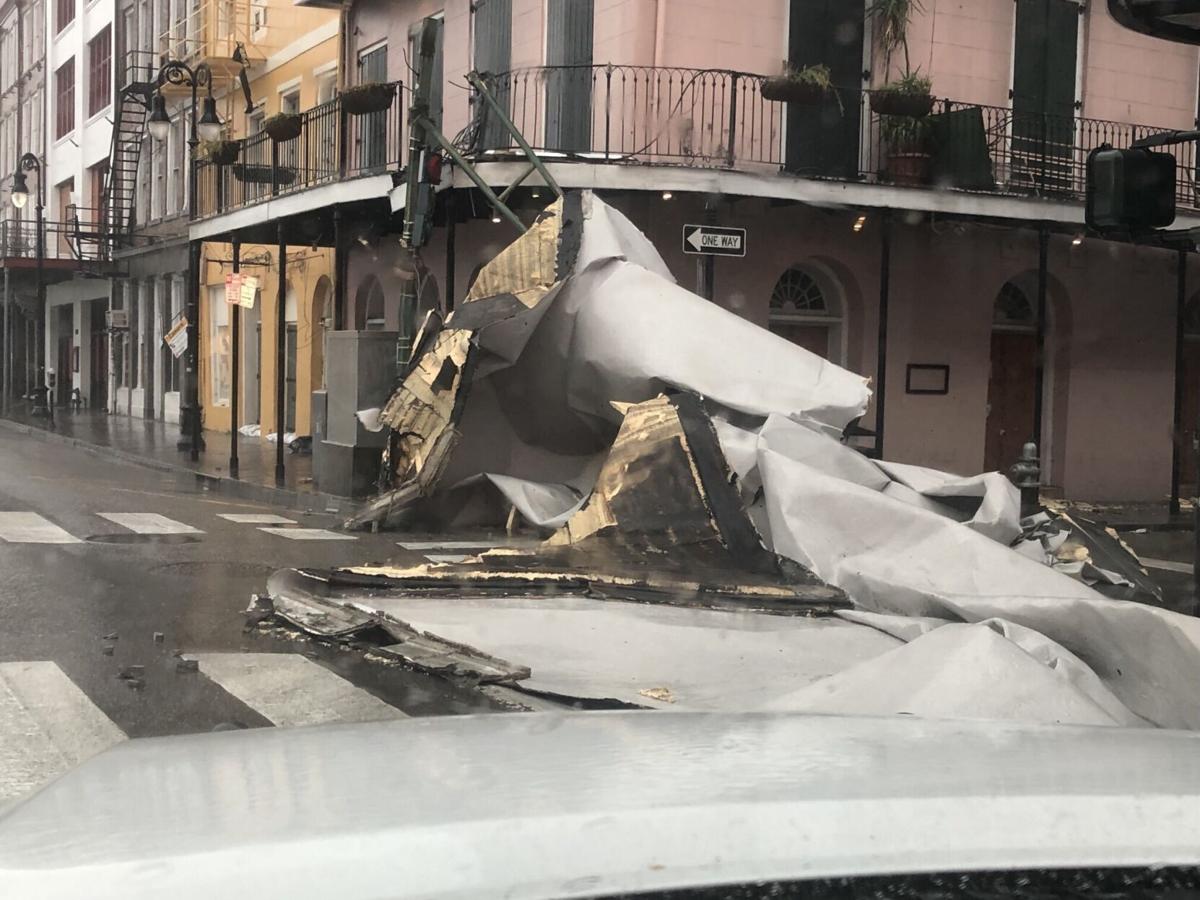 Roof off building in New Orleans at Toulouse & Decatur St. 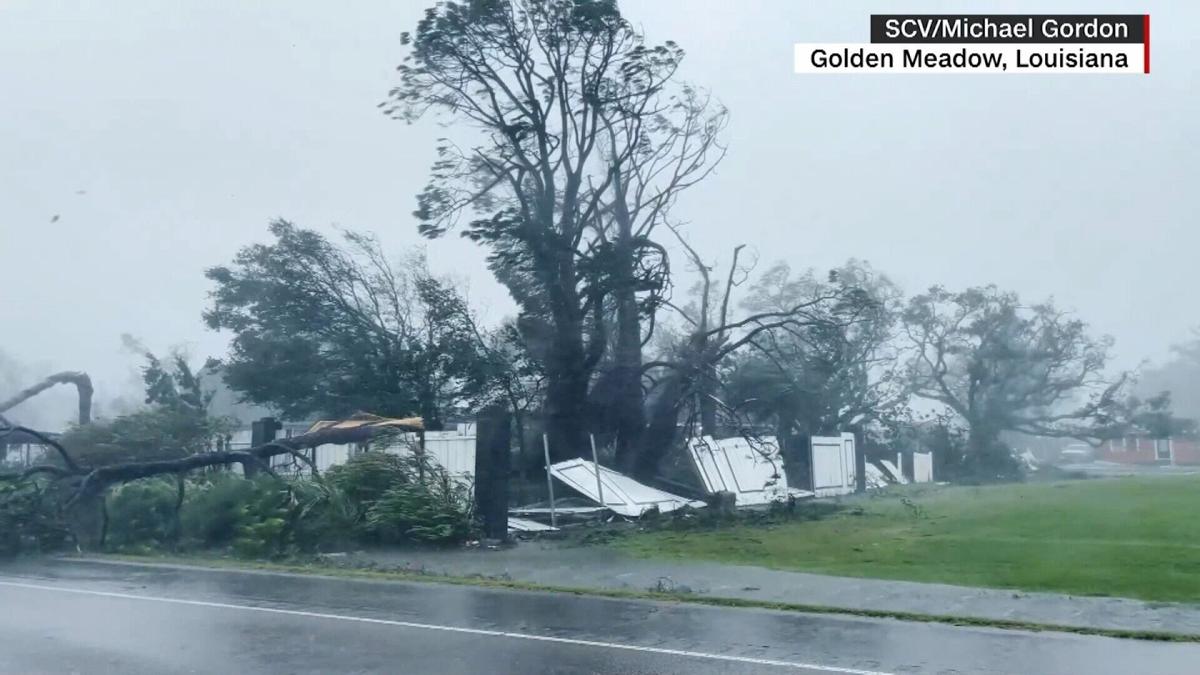 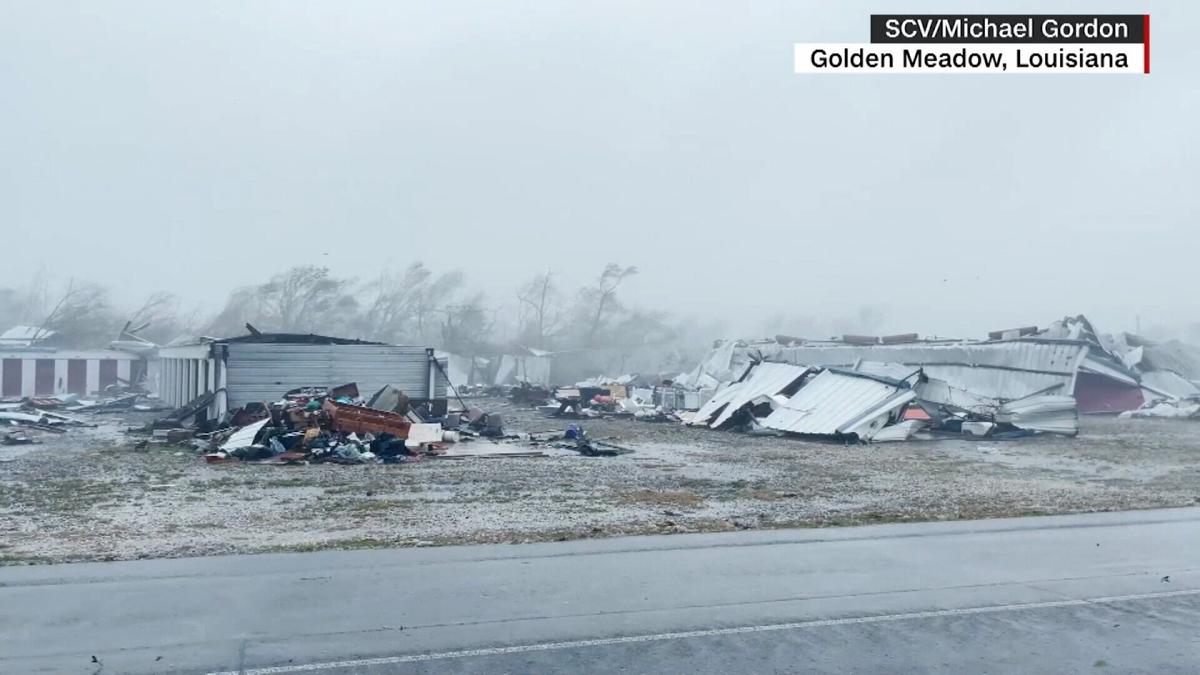 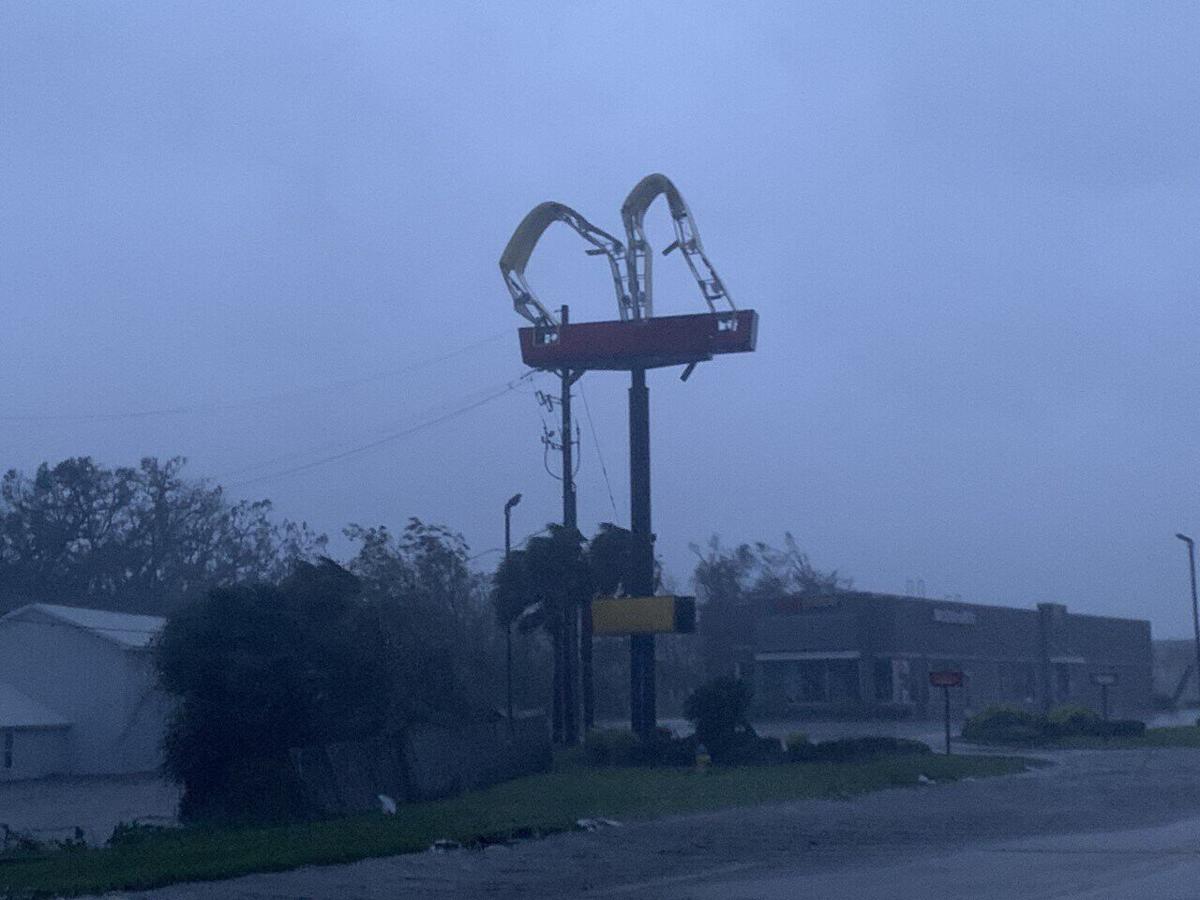 A twisted McDonald's sign in Houma, Louisiana due to Hurricane Ida. 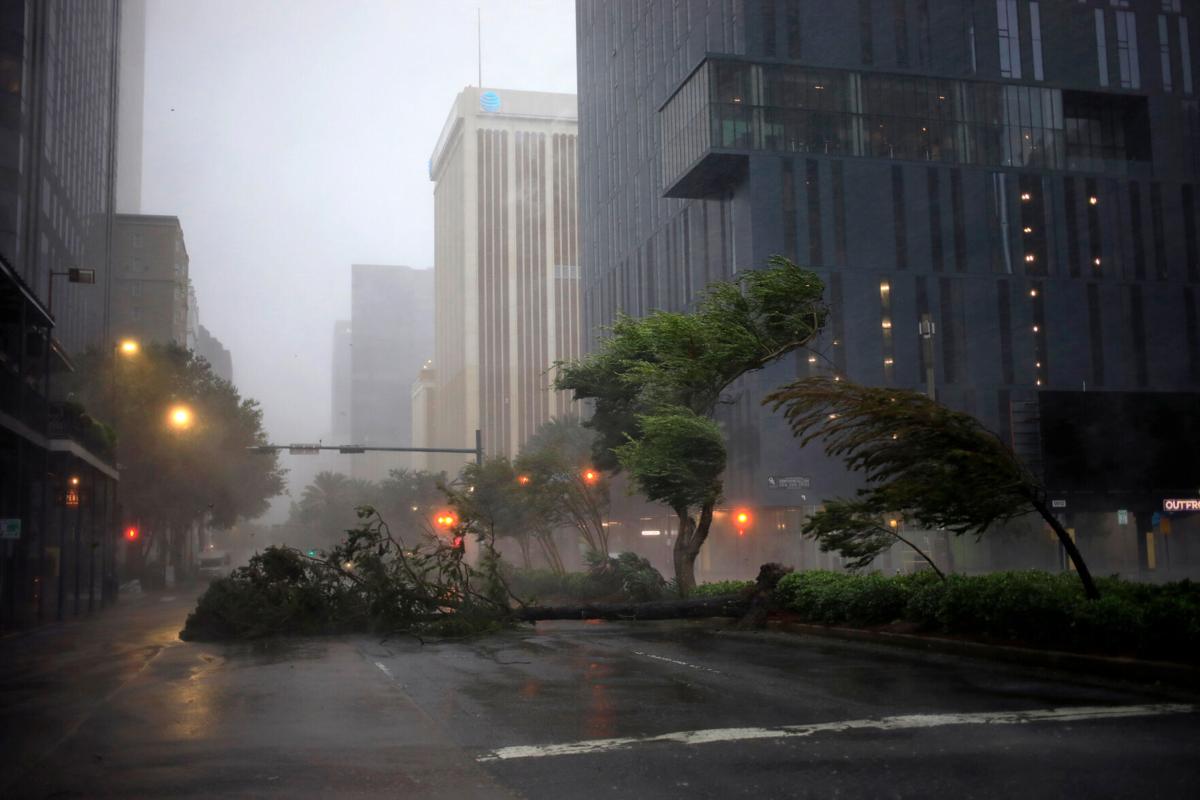 Trees sway in the wind from Hurricane Ida in downtown New Orleans Sunday. 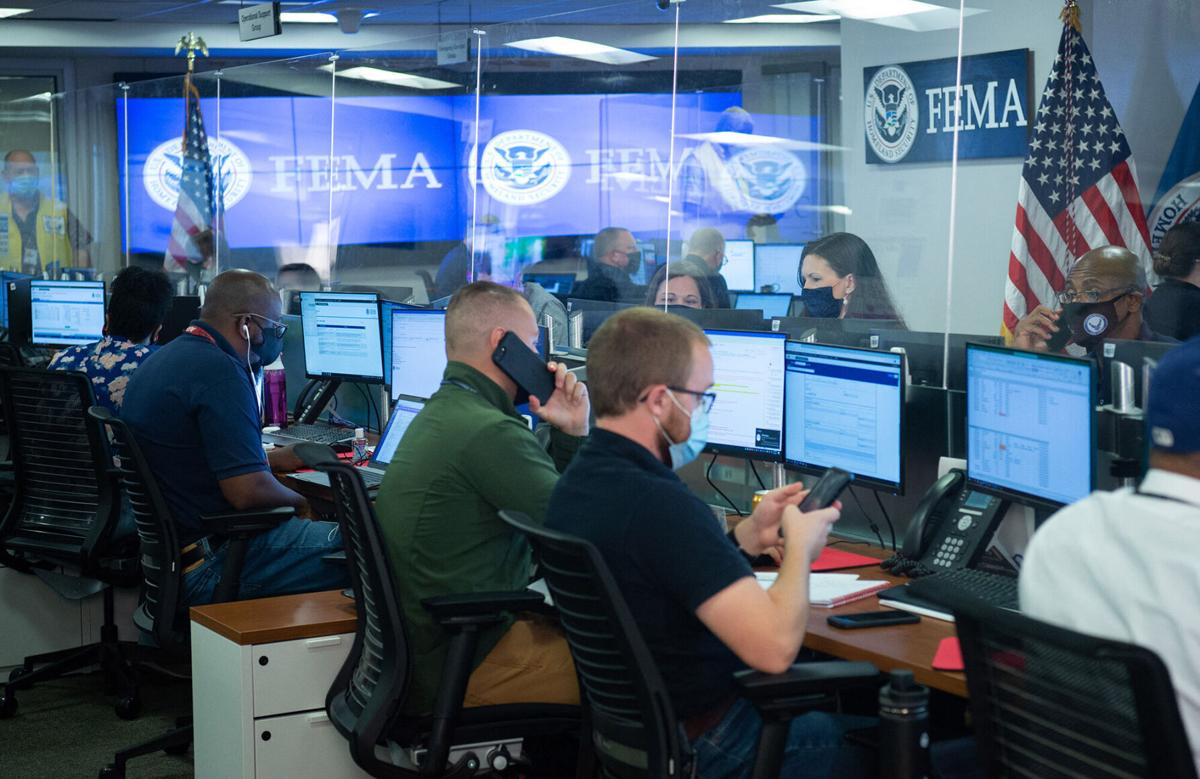 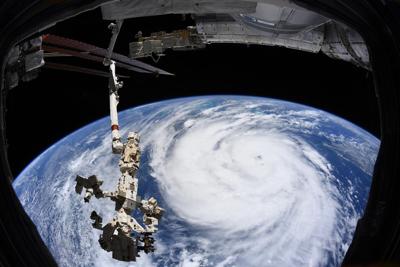 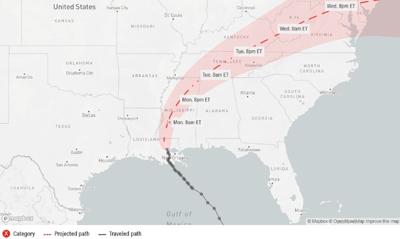 A vehicle is abandoned in a flooded ditch next to the highway Sunday in Bay Saint Louis, Mississippi.

Roof off building in New Orleans at Toulouse & Decatur St.

A twisted McDonald's sign in Houma, Louisiana due to Hurricane Ida.

Trees sway in the wind from Hurricane Ida in downtown New Orleans Sunday.

Ida, now a slow-moving tropical storm over southwestern Mississippi, still will pose a major threat for more flooding not just in those two states but also into the Tennessee and Ohio valleys as it crawls north over the next few days.

The scope of damage is only now coming into view as day breaks -- but rescuers are getting numerous calls for help from people who've climbed into attics or roofs as waters rose in their homes -- especially in parishes just outside New Orleans.

"Seems like there's hundreds, possibly more, people trapped in their houses, with some extent of water -- from a foot deep to people in the attics," Jordy Bloodsworth, fleet captain of the Louisiana Cajun Navy volunteer rescue group, told CNN on Monday morning.

Bloodsworth was sending his teams to LaPlace, in St. John the Baptist Parish just west of New Orleans, where the National Weather Service and posts on social media have indicated numerous people have asked for rescue.

In LaPlace, Tiffany Miller was stuck in her attic Sunday night after floodwaters came into her home, she said. Perhaps 3 to 5 feet of water had entered homes in her subdivision, she told CNN affiliate WDSU.

"When we got in the attic, the water was right below my knees," Miller said. "I know that we're not in it by ourselves, and it's going to be OK."

Residents also were forced to their roofs in Jean Lafitte south of New Orleans, the mayor said, as levees were overtopped in that town.

"I've never seen water like this in my life," said the mayor, Tim Kerner Jr. "It just hit us in the worst way possible, and it was such a massive storm that it just totally devastated us."

Ida made landfall Sunday near southeastern Louisiana's Port Fourchon as a Category 4 hurricane around 1 p.m. and slowly scraped across the state, delivering catastrophic winds and torrential rains to the same places for hours.

Video from these areas showed parts of roofs flying off homes and businesses, fallen trees lying on cars and homes, and high water taking over roads and communities in southeastern Louisiana and southern Mississippi.

Ida slammed into Louisiana on the 16th anniversary of Hurricane Katrina, tying with 2020's Hurricane Laura and the Last Island Hurricane of 1856 as the strongest ever to hit the state.

Entergy Louisiana said some of its customers could be without power for weeks. And the storm surge of up to 15 feet and winds as strong as 150 mph could leave parts of southeast Louisiana "uninhabitable for weeks or months," according to a local hurricane statement from the National Weather Service in New Orleans.

Residents trapped by rising waters in their homes

In part of Plaquemines Parish southeast of New Orleans, flash flooding was reported early Monday morning after a levee failed near Highway 23, according to the National Weather Service. Based on the number of calls, texts and emails coming from the area, Louisiana Lt. Governor Billy Nungesser earlier told CNN he believes there were probably "several dozen" people who didn't leave the parish and were waiting out the storm.

In parts of Jefferson Parish, next to New Orleans, officials have gotten calls from people asking for help as water rose chest-deep in their homes, Parish President Cynthia Lee Sheng told CNN Sunday night. But with high winds, flooding and reports of hazards, including downed power lines and uprooted trees, Sheng said the dangerous conditions have prevented emergency crews from helping.

Tornadoes will continue to be a threat for the Gulf Coast through Monday, with the threat expanding into central and northern Mississippi and Alabama.

The storm is expected to turn northeast Monday and head to the middle Tennessee Valley and Upper Ohio Valley through Wednesday.

The Tennessee Emergency Management Agency advised residents across the state Sunday to prepare for Ida, warning that heavy rain and flooding are possible in areas still recovering from a flood emergency last weekend.

Until then, Louisiana will bear the brunt of the rain, flooding and wind.

Resources to help those affected by the storm have been impacted as well, with hospital staff relying on generators to keep life-saving machines running and sleeping on air mattresses in their workplaces. And New Orleans 9-1-1 reported technical difficulties amid power outages as of Monday morning, encouraging anyone experiencing an emergency to find their nearest fire station or approach the nearest officer.

Hospitals dealing with storm damage and attending to victims of the hurricane were largely already stretched by the Covid-19 pandemic.

"Before going into this storm, our hospital was already almost at capacity," Ochsner Health System's Dr. Derek Smith told CNN. "We know the coming hours are going to be even more of a test."

The hospital is running on generators, and staff there have been locked in -- sleeping on air mattresses and working around the clock to care for patients, Smith said.

A portion of the roof of The Lady of the Sea General Hospital in Galliano was ripped off as Ida came ashore, Webre told CNN. The county was also forced to relocate its emergency operations center to a different building after the first building's roof began to leak Sunday, Webre told CNN.

Hattiesburg, Mississippi, hadn't yet felt the worst of Ida when Mayor Toby Barker spoke to CNN Sunday night, but officials there were bracing for damage from the storm and stress on their hospitals.

"We know that both our hospitals are at capacity because of Covid, and we really need everyone tonight just to make good decisions," Barker said.

The storm has also impacted access for rescuers to get in and residents to get out.

The Kerner Swing Bridge in Jefferson Parish south of New Orleans was hit by a barge Sunday as Ida beat down on Louisiana, according to the parish government, prompting officials to warn residents it may not be safe to drive across.

"Any residents that may still be in Lafitte are advised to not attempt to drive on this bridge. We do not believe it is structurally safe," Jefferson Parish tweeted.

And due to fallen trees on the roadway, the Louisiana Department of Transportation and Development shut down about 22 miles of Interstate 10, a major thoroughfare that transits the state east to west.

Once the storm does calm, 21 urban search and rescue teams from about 15 states will be ready to search, Louisiana Gov. John Bel Edwards told CNN Sunday.

"At the height of a hurricane, you can't get first responders out because it's just simply too dangerous. The wind speeds don't allow for that," he explained. "Just as soon as we can, we will be engaged in very robust search and rescue operations."

"It's tough all over southeast Louisiana," Edwards said. "This is a very devastating storm."

States with the most new small businesses per capita

To find the top 20 states with the most new small businesses per capita, Simply Business analyzed the Census Bureau’s Business Formation Statistics from August 2020 to July 2021. Click for more.

'The View' turns 25. Here are 25 times the show gave us something to talk about