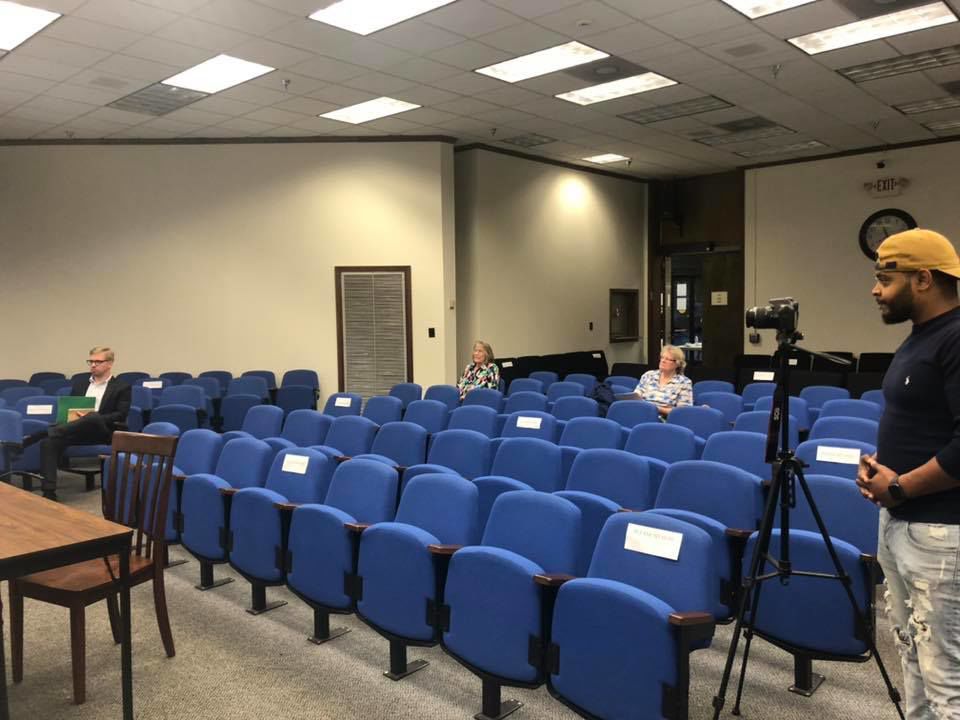 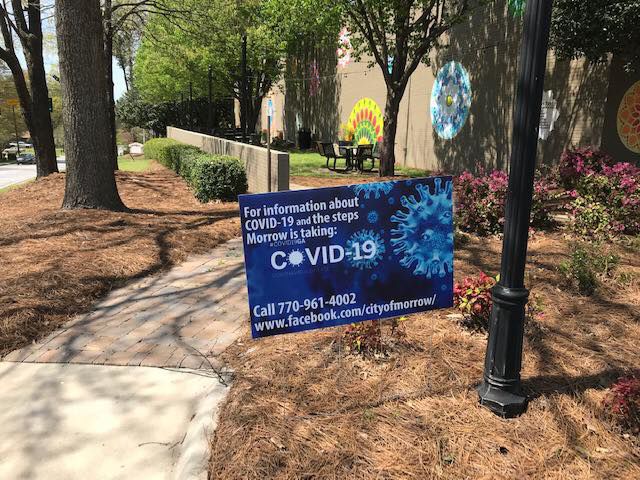 The City of Morrow has put up signs directing residents to a city website for COVID-19 information. 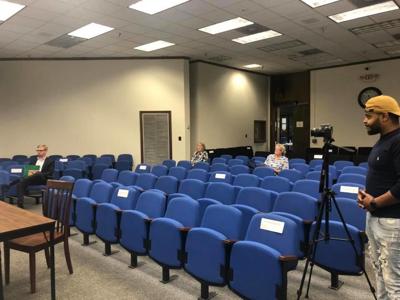 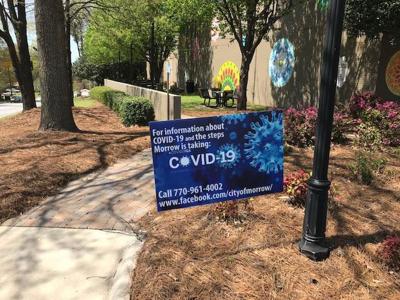 The City of Morrow has put up signs directing residents to a city website for COVID-19 information.

MORROW—The City of Morrow passed a resolution declaring a 14-day state of emergency due to COVID-19 at its March 24 meeting.

The meeting was not livestreamed or teleconferenced, as other cities' emergency declaration meetings have been, but it was open to the public and included the work session. A local video producer recorded the hour and 26-minute-long meeting on a DSLR camera before a nearly-empty auditorium. Councilmembers Van Tran, Renee S. Knight and Dorothy Dean attended by phone. Mayor John Lampl, Councilman Khoa Vuong, City Manager Sylvia Redic and several city staffers were present in chambers. Audio was low and not always audible to councilmembers on the phone.

• No public or private gatherings of more than 10 people "outside of a household or living unit" are allowed. This does not apply to gatherings of medical and health providers or other "essential" businesses under Georgia law.

• No public gatherings of 10 or more people are allowed "on any property owned or controlled by the city." That includes "any park, public square, public space, playground, recreational area, or similar place of public gathering." However, people are allowed  to use "sidewalks or designated pedestrian areas of parks for walking or other exercise if they are not participating in an organized gathering."

• The city will not cut off "any public utility service provided by the city on account of non-payment." After the declared emergency ends, people will have 55 days (at this point, until June 1) to pay before being disconnected.

• The city manager has the power to decide which city services are required or discretionary, to assign and modify employee duties, to decide which city employees telework, to suspend discretionary services and tell those employees not to come to work, and "to maintain, to the best of the ability of the resources of the City of Morrow," public safety, public works, healthcare, building permits and other essential services.

• The city manager and mayor "are authorized to suspend any section of the purchasing policy necessary to use the single-source provision" but "shall continue to seek the best prices during the state of emergency."

• All deadlines for permits, occupation tax certificates and "similar civil approvals" are tolled during the emergency plus 55 days (right now, June 1).

• Restaurants that cannot maintain 6' between patrons must shut down their dining areas. However, they can serve customers through delivery, drive-through or take-out. Restaurants licensed to sell alcohol may "sell unopened bottles or cans of beer or wine for take-out consumption off-premises." However, they may not sell spirits or liquor.

• All other businesses must post signs on entrance doors "informing customers to maintain at least six (6) feet of personal distance between themselves and others."

At least one garbage company reportedly expressed concerns about handling COVID-19-infected items and wanted to cut back on service. Lampl countered that the city should negotiate a discount and the council agreed.

Redic later told the News that the city is asking customers of both Advanced and Latham to "refrain from setting out bulk items through Easter - no reduction - then after Easter, we will increase allowable bulk to make up for the holdback."

Because every event at the Morrow Center "We need to show the community that we get it," Redic said. Because so many businesses are closed right now, the city has only been able to contact 200 of them by phone--slightly less than half--and has made many more calls than that, Redic said. The city is putting together a business newsletter to try and reach them with information about permitting and other matters.

The council also discussed authorizing a site on city property for a Vietnam War memorial.

In an excerpt from an e-mail to a citizen, provided by Redic, Lampl said, "Future City Council meetings will be on video and it can be reviewed on City Pages. However, state law requires us to have open meetings and we can not prevent anyone from attending. We will conduct temperature screenings and encourage those above 100 degrees to remain in the lobby."

Redic said the city is looking into livestreaming options: "Unfortunately I don’t know that we have the bandwidth for livestreaming. If this becomes a new norm, it may be an investment we consider. Three of our Councilmembers joined by conference call, but we will explore other options to allow public viewing."

At the previous meeting, Police Chief Jimmy Callaway had used his cellphone and Facebook Live to publicize an update from Fire Chief Roger Swint and Medical Director Jim Augustine.

You can watch the March 24 meeting on YouTube at https://bit.ly/33RUnL1.

For all the latest local, county, state, international and world COVID-19 news, bookmark and visit

A 19-year-old called out New York Democrats accepting police campaign donations. To his surprise, many have listened