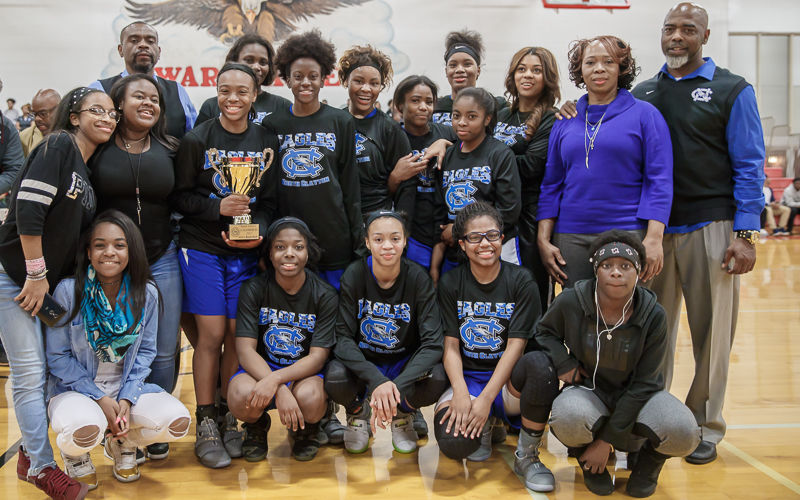 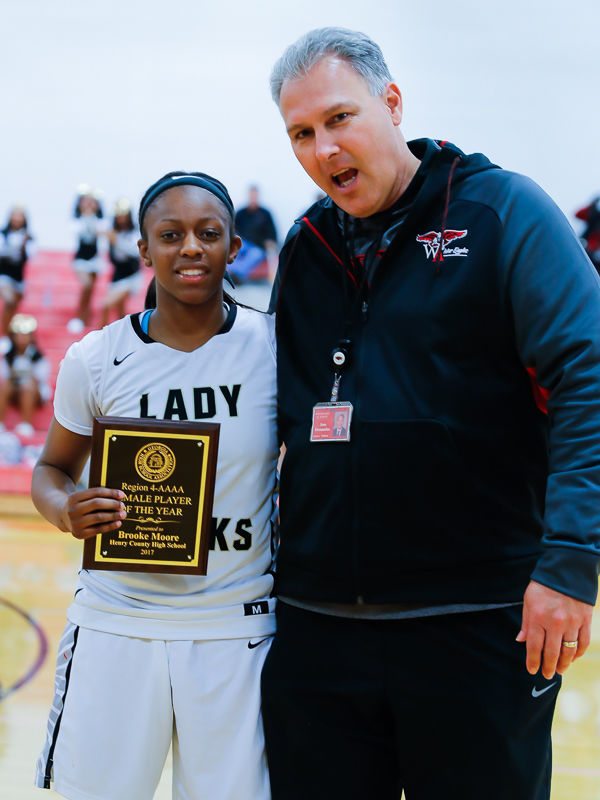 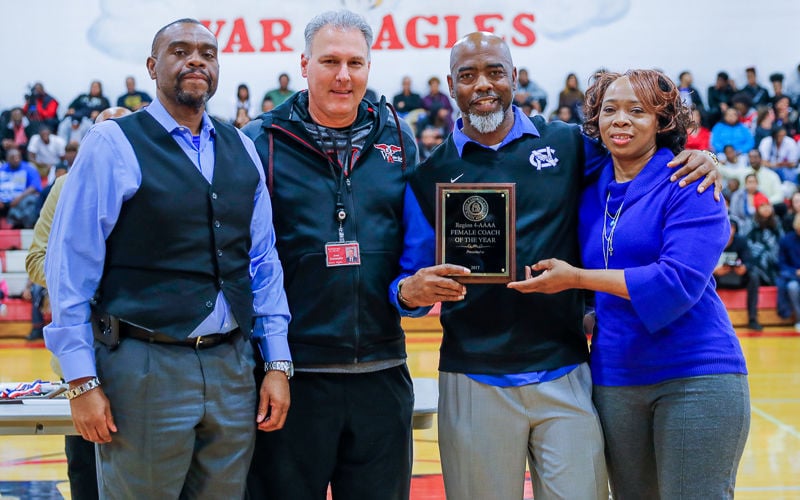 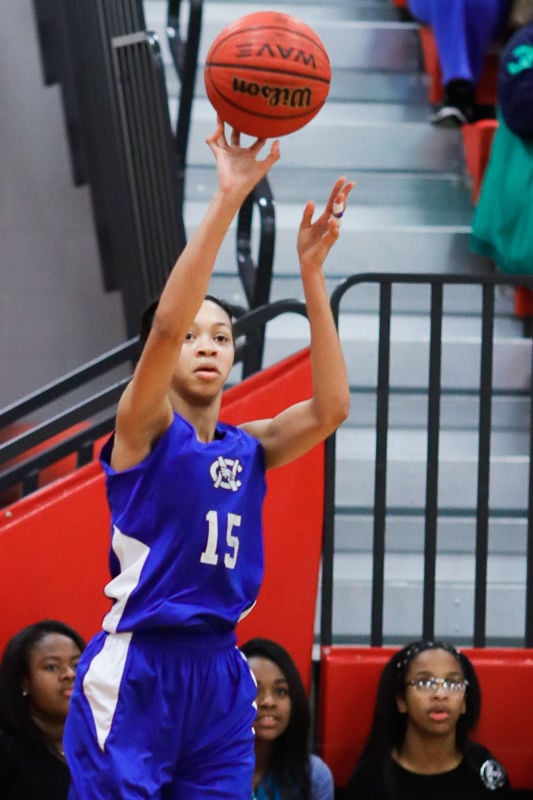 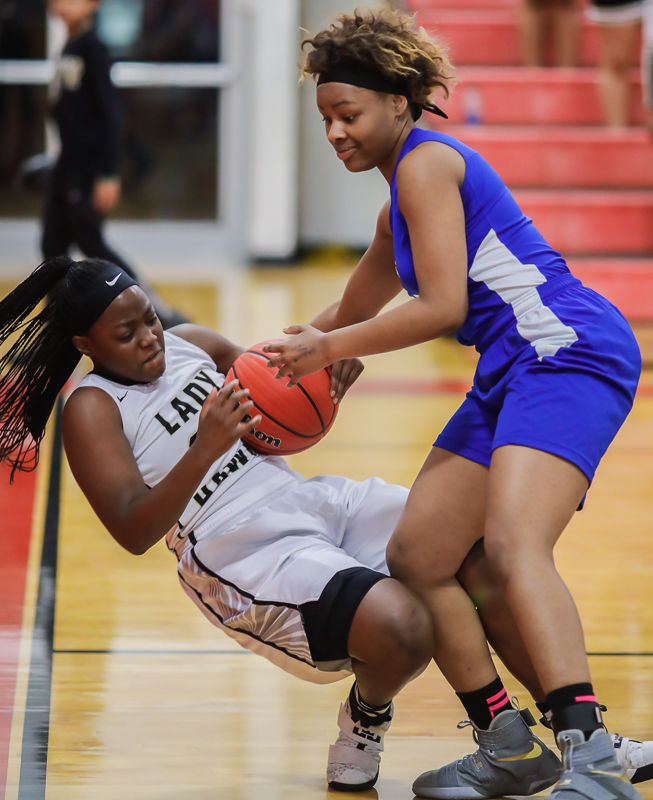 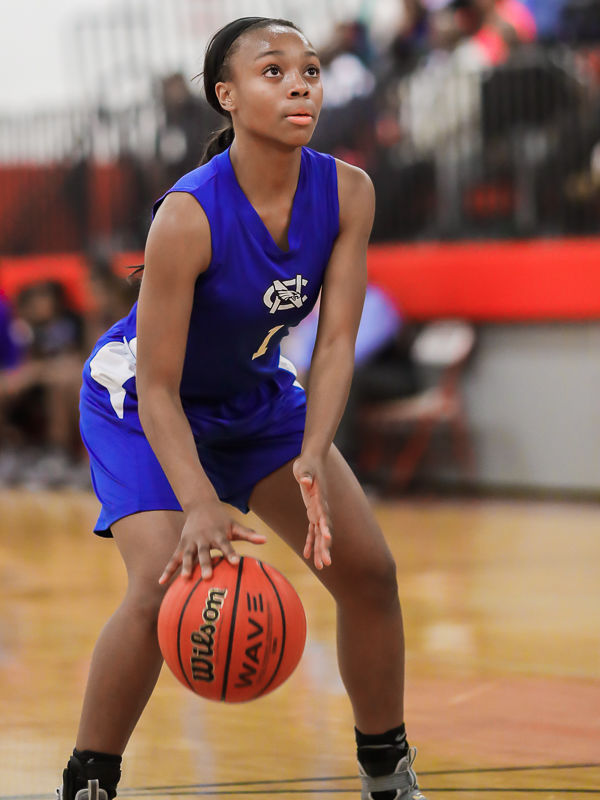 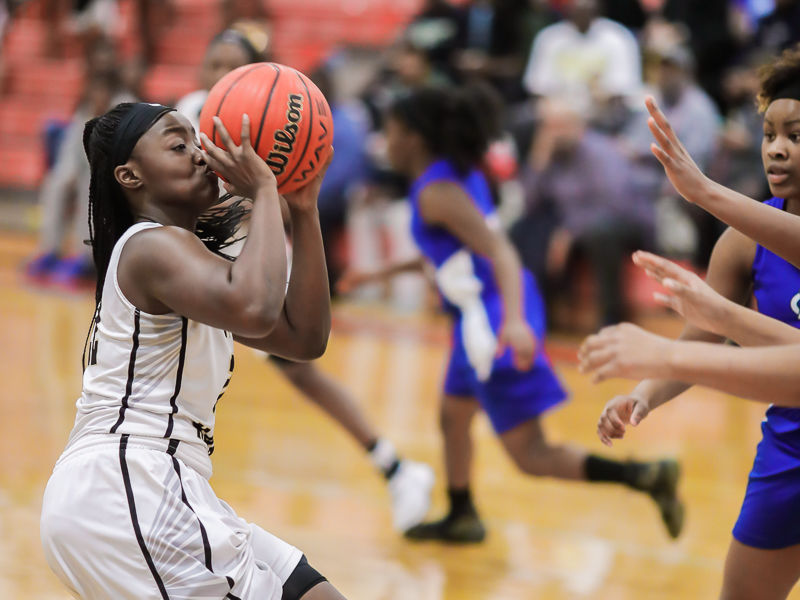 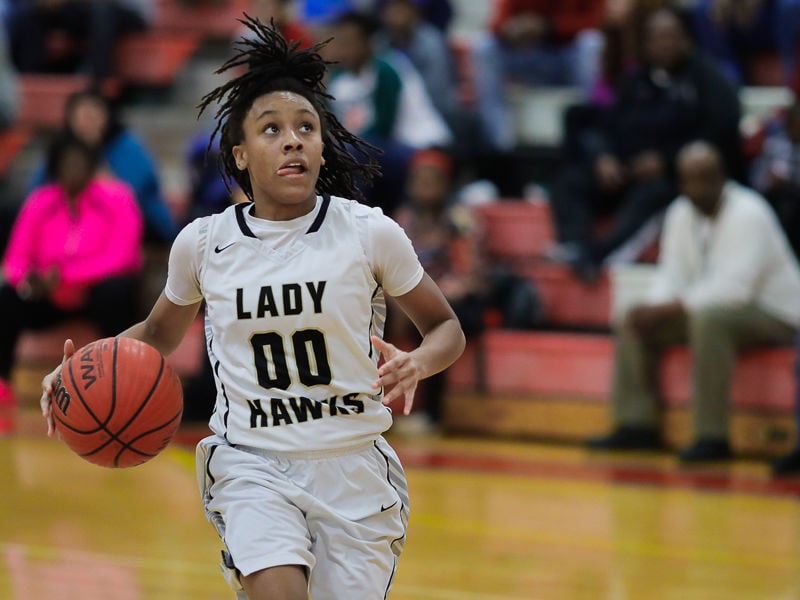 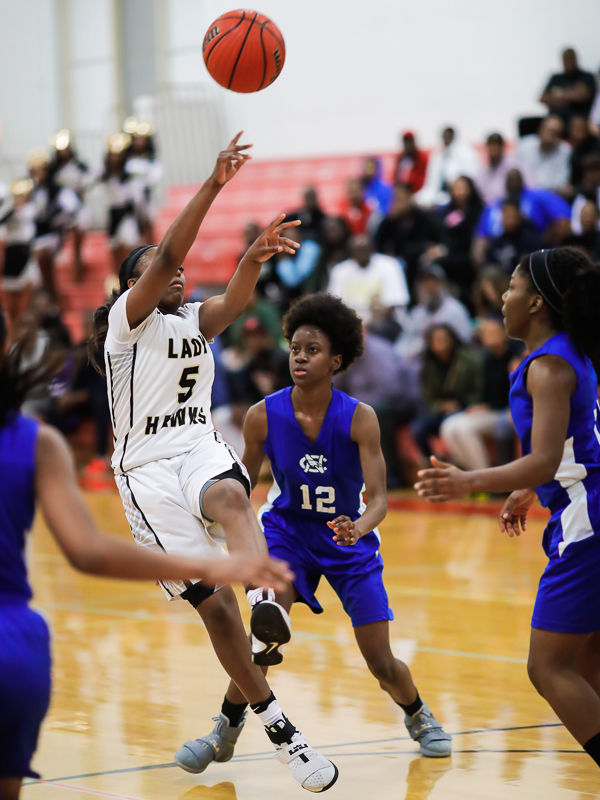 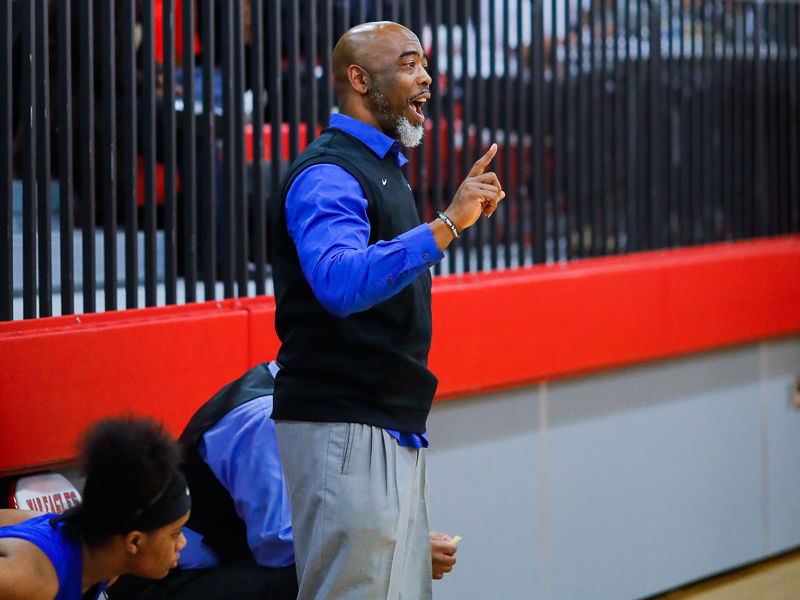 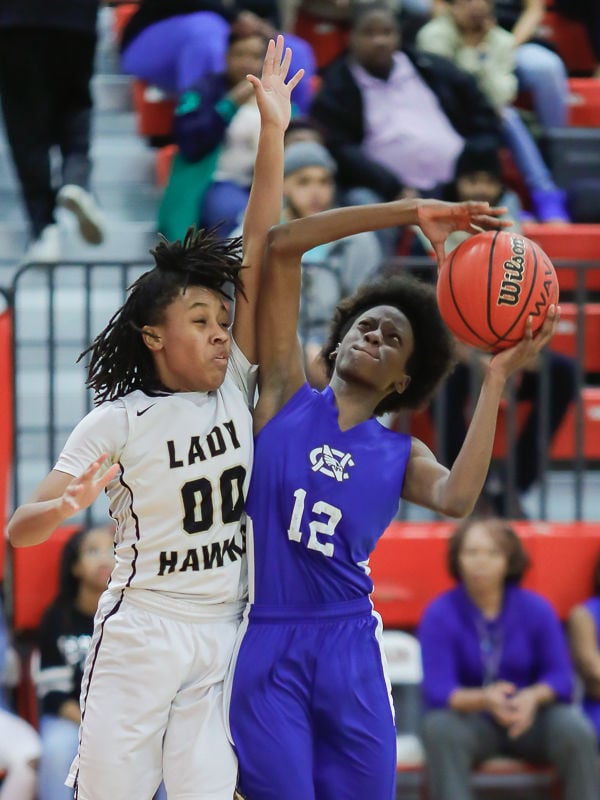 North Clayton’s Jasmine Holcombe is fouled attempting to get a shot off under the basket during the Region 4-AAAA championship game on Friday night. (Special Photo: Ben Ennis) 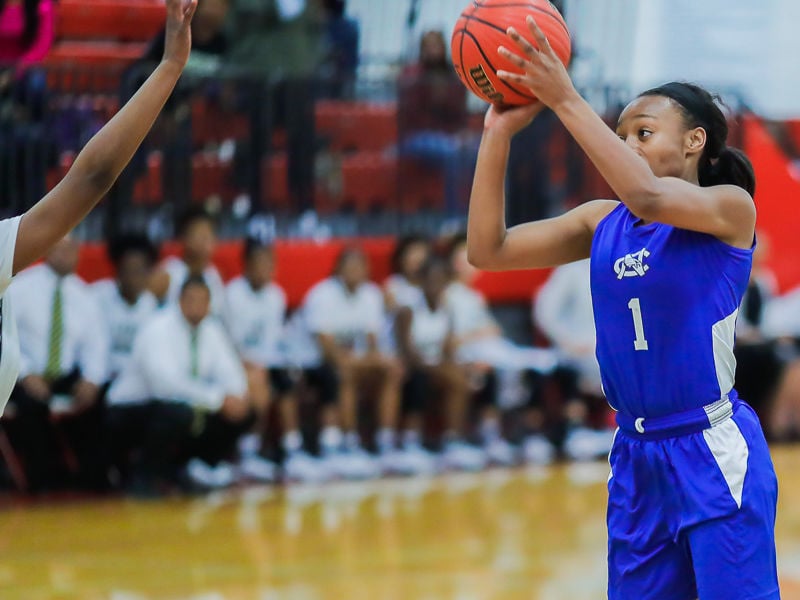 North Clayton’s Dalania Clardy gets off a jumper over a Henry County defender during the Region 4-AAAA Basketball Championship game on Friday night. 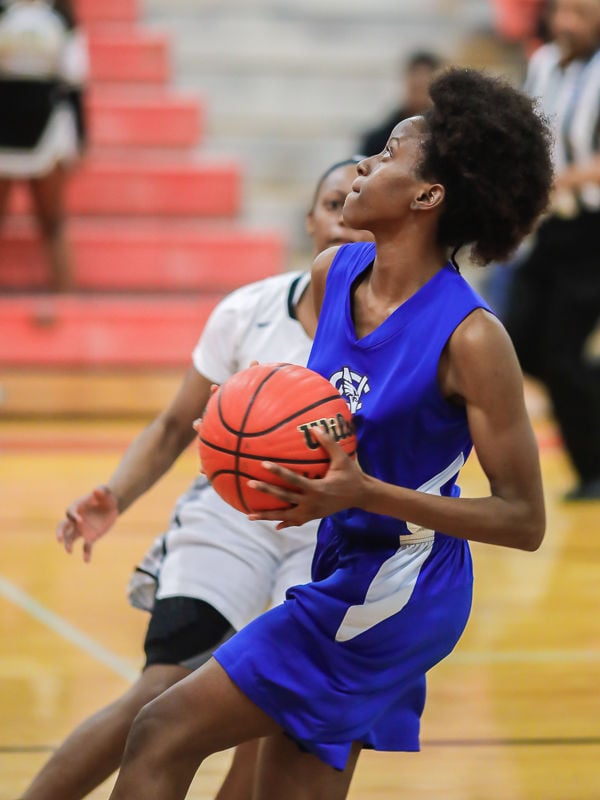 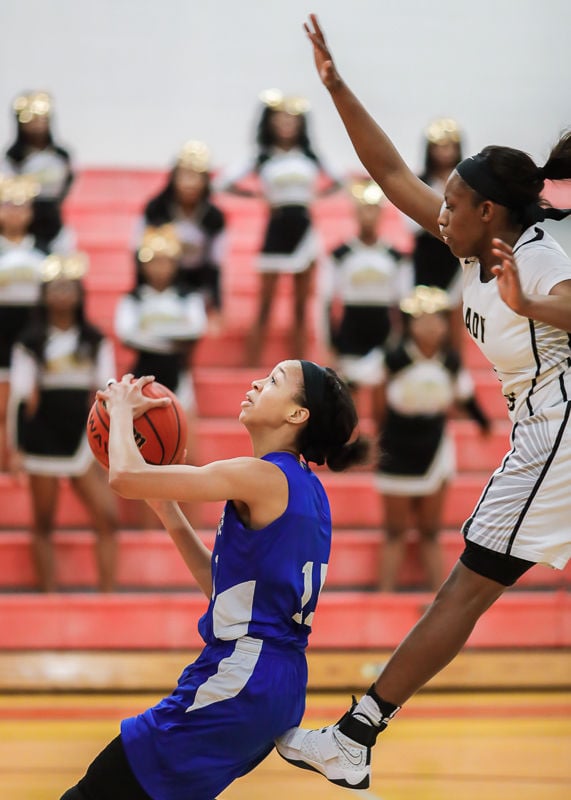 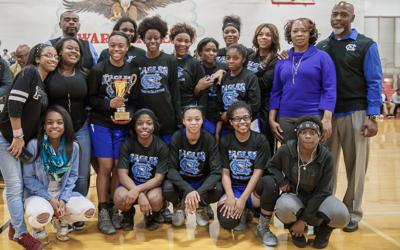 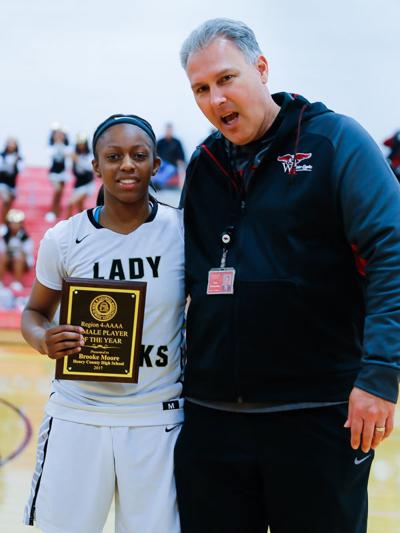 North Clayton’s Jasmine Holcombe is fouled attempting to get a shot off under the basket during the Region 4-AAAA championship game on Friday night. (Special Photo: Ben Ennis)

North Clayton’s Dalania Clardy gets off a jumper over a Henry County defender during the Region 4-AAAA Basketball Championship game on Friday night.

COLLEGE PARK — At the start of 2017, the North Clayton Lady Eagles were 4-9 and in last place in Region 4-AAAA.

A little over two months later, North Clayton celebrated its 15th straight win and a Region 4-AAAA championship with a 66-43 victory over top-seed Henry County Friday night at Woodward Academy.

It was Monea Battle, however, who got the Lady Eagles off to a flying start to begin the game. Battle hit three three-pointers in the first eight minutes. Henry County answered with Region 4-AAAA Player of the Year Brooke Moore, who scored 12 points of her own in the opening period. A late basket by the Lady Eagles gave them a narrow 18-16 advantage heading into the second quarter.

Clardy and Battle did most of the scoring for North Clayton, but the rebounding of Jasmine Holcombe and Kereen Thompson and the playmaking ability of N’Keria Larris made it near impossible for Henry County to play successful defense.

“We’re meshing at the right time,” North Clayton head coach Fred Hill said. “They believe in each other. When we’re down, they’re picking each other up because they know what we can do. That’s the love they have for our team right now. They love each other.”

The third quarter was more of the same for Henry County. After Ashley Burks cut the lead to 40-27 with a three-pointer, the Warhawks were outscored 10-2 over the next three minutes. A technical foul on Moore opened the door for the Lady Eagles to secure the necessary 30 points to enact the mercy rule.

Henry County cut slightly into the lead in the six-minute final quarter but never threatened to make a real run. North Clayton saw out the rest of the clock and celebrated the culmination of effort from the last two months.

“We envisioned this from the get-go. People ask me if I’m surprised about this championship. We envisioned this, we envisioned cutting down the net,” Hill said. “My girls played hard, it’s all about mental toughness. I was proud of that. 15 games ago, we felt like we should have been undefeated if girls weren’t hurt.”

North Clayton (18-9) will be the No. 1 seed out of Region 4 in next week’s Class AAAA playoffs while Henry County will be the No. 2 seed. Both teams will play an opponent from Region 2 at home.