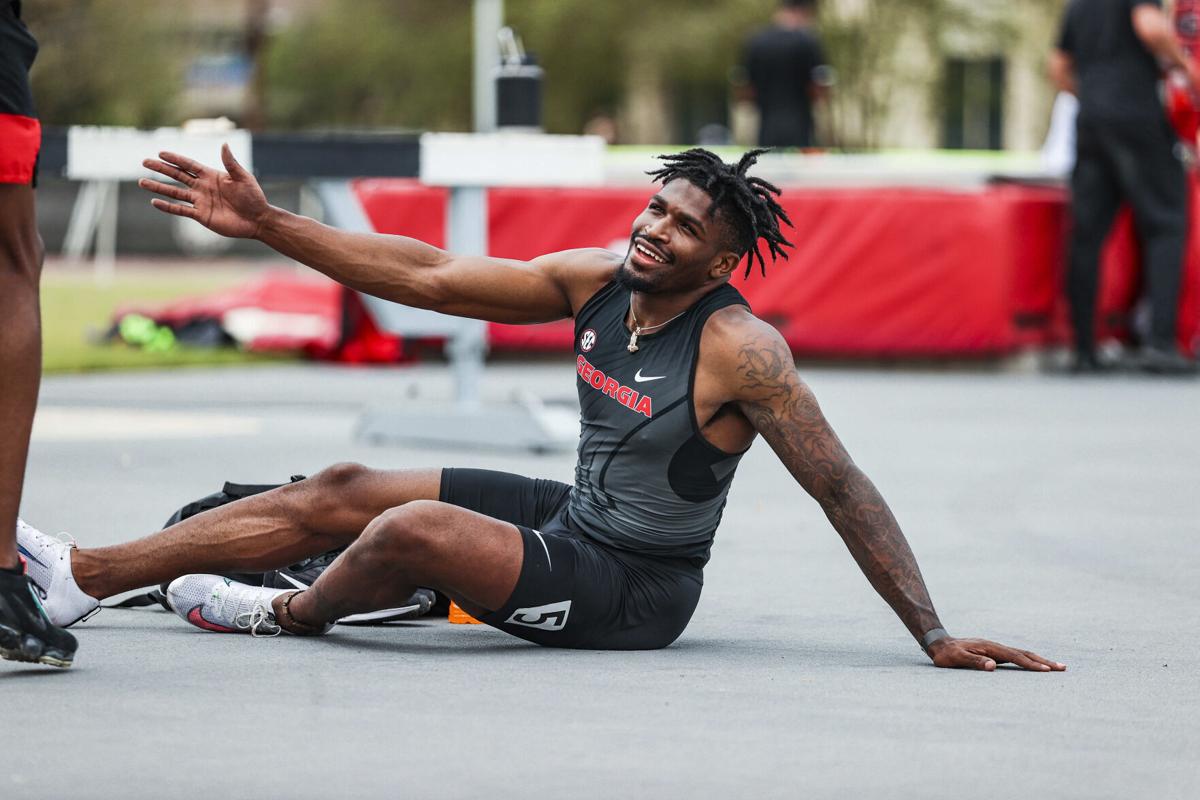 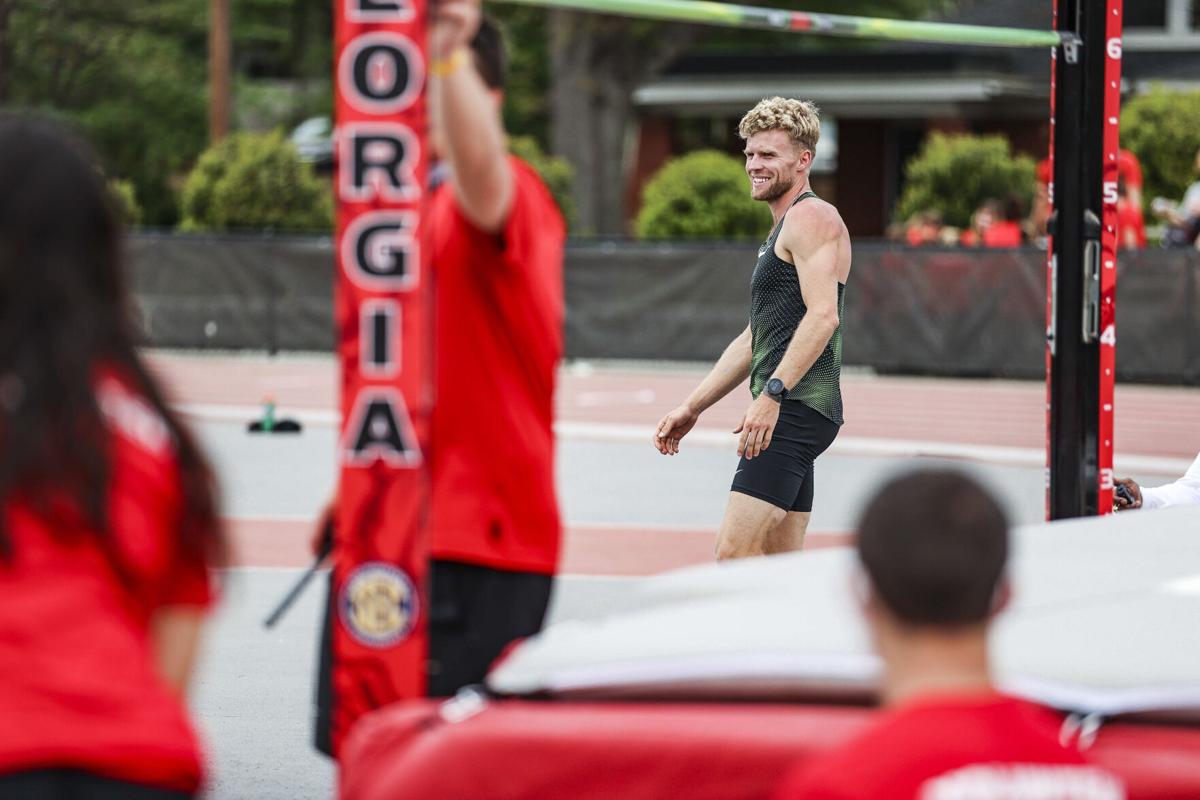 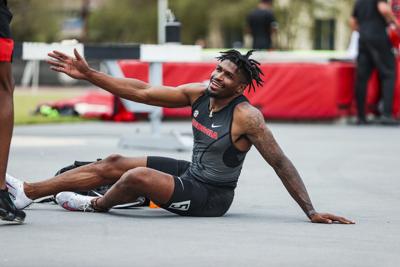 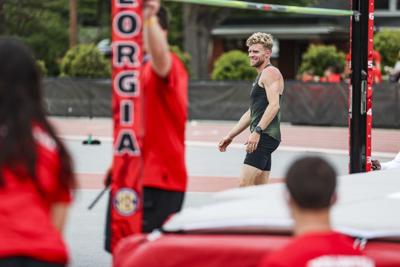 Before the dastardly virus disrupted our way of life, one could imagine that there would have been an updraft in attendance the last two springs at the Spec Towns Track.

COVID-19 deterrent protocols caused people to be turned away, all missing out on witnessing a marquee performer render world class performances. Matthew Boling, the Texan who has had Georgia on his mind since his first visit to the Classic City while a high school student, is a magnificent sprinter and an Olympic hopeful.

Every time he blasts out of the starting blocks, there is the likelihood that he will break another record, which has become habitual this spring. He has the kind of speed that turns heads in the 100, 200 and 400-meter sprints. In addition, he is an accomplished long jumper.

He is in the process of choosing the event in which he has the best possibility of making the U. S. Olympic team, which is like all teams across the world, wondering if the Olympics will take place.

In last Saturday’s meet after he had won the long jump (25 feet, 2 3/4 inches), he had taken the baton on the last leg of the quarter mile relay, sprinting with abandon to the finish line for first place. He then ran 45.87 seconds in the 400-meter event to finish second behind teammate Elija Godwin, who finished 45.86. Godwin is eyeing the Olympics, too.

If the 400 had been Boling’s only event of the day, he might have fared better. As it was, he was eager to extend congratulations to his capable teammate. Once Boling concentrates on the one event that he gives priority, this world-class athlete will likely be in the mix for a berth on the U. S. Olympic team.

An Olympic athlete has a short window in which to compete, and all eyes are on what might happen in Tokyo. The latest is that no foreign spectators will be allowed into the capital city’s “National Stadium,” but that the show will go on.

It was something of a downer last weekend with limited spectators in the stands to witness Georgia’s men and women track athletes performing at such a high level. This team is more than Matthew Boling, and he would be the first to advance that notion.

There is Jasmine Moore, who is the No. 4 all-time collegiate performer in the triple jump at Georgia and is another Olympic hopeful. Kayla Smith set the school record in the pole vault with 14-8 1/4, a fitting performance in her final home meet. She could well become a national champion.

I came to see Boling run, and I am happy to report that I was not disappointed. It was the only opportunity of the spring and there is the fear that this could be his last spring in red and black, owing to a number of circumstances. If COVID turmoil remains, who knows which crisis is next?

If things continue to go well for Matthew, however he should have a bountiful professional career. One suspects that his passion for a degree means that he will enjoy some measure of UGA campus residency with the passing of time. He likes it here, he likes his teammates, he likes the students and the professors. His parents were so taken by the landscape and atmosphere that they bought a home in Sandy Springs to be close to Matthew and his brother Michael who is enrolled at Georgia Tech.

In the finest of weather, as perfect as it could be for a track meet, there was one race that merited special attraction—the women’s 1500 meters.

Anna Marian Block, a Georgia track coed, has experienced marked improvement in this event. She is a native of Athens with a Bulldog heritage that warms the heart.

Her maternal great grandfather, George Fesperman, of Waycross was a long time member of the UGA athletic board. The supreme loyalist, Fesperman could not have contained himself had he seen his great granddaughter dominate her race, winning by more than 85 meters, a very wide margin.

It was George Fesperman whom I have often enjoyed quoting about love of alma mater. Fesperman was a football manager in 1923 and had this to say about his alma mater.

“The University has been wonderful to me. She has done so many wonderful things for me and for all the people of the state. No one holds Georgia in higher regard than I do. There may be some, somewhere, who loves the University as much as I do, but none love it more. Next to my family, church and country, there is nothing but the University of Georgia. She will always have my love, my enthusiasm, my appreciation, my loyalty and all the support I can muster. I am so wrapped up in Georgia, it is real difficult for me to find fault even when she is at fault.”

Somewhere this doting alumnus was smiling at Anna Marian’s big day on the Spec Towns Track.

Metros where homes are selling the fastest

Credible compiled a list of 20 U.S. metro areas where homes are selling the fastest, using data from Zillow and ranking homes according to the average number of days they were listed before there was a pending sale in December 2020, the most recent month in which data was available for all metros. Click for more.

Travel to Sri Lanka: What it's like to visit now during the Covid pandemic